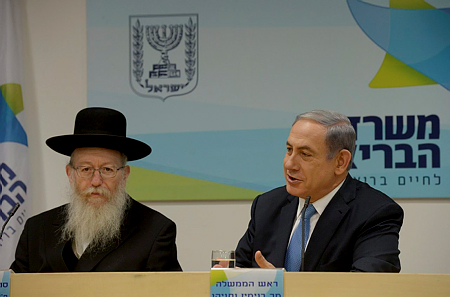 Finally, at 1:00 P.M. Israel time a new Israeli government was formed. I need not say much about it since I have before written on what was going to happen after there was a unity government agreement.  Things have pretty much worked out as noted before.

However, I wanted to state a few things.

The new government has 36 portfolios and is super bloated.  However, it was the only way to get everyone on board.  Benjamin Netanyahu promised Blue and White an equal number of portfolios to Likud even though their joining in the unity government lost then some 14 members of their Parliament block.  This was the price of getting them to join with Likud.  Now however there are two major issues.  Several members of Netanyahu’s party, Likud, are very angry.  Though they are higher on the list of those elected, they are not getting portfolios in the new government.  It seems like Bibi picked those more loyal to him than those higher on the list.  My guess is that this will diminish is support in the future and in his upcoming trial.  Bibi has made many enemies of past allies.  I would think that a new Likud leader could very well be chosen in the next election.

Secondly, Bibi’s trial begins May 24, for fraud and more. If he is found guilty, his leadership of Israel is over. This could take one to three years. For Israel’s sake they should speed this up and either convict him or clear him.

Thridly, the prospects for the annexation of 30% of the land in Judea and Samaria (the West Bank) including the settlements and the Jordan valley look very probable now.  Amazing!