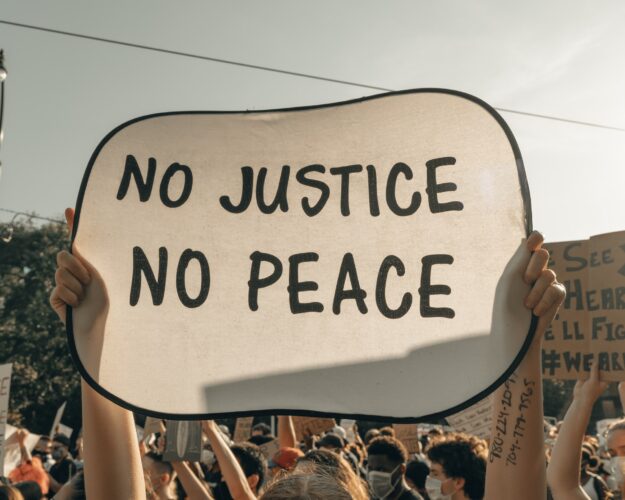 The Black Lives Matter organization demands are less about saving black lives and more about enforcing a socialist ideology.  I believe it is a pretext and front organization for a Marxist revolution.  They are using the blacks intentionally through false narratives to foster the revolution. The BLM leaders in the national organization have exposed this and the local chapter leaders are indeed on board. What do they seek?  Do the protestors know what the BLM organization is seeking?  I doubt many do.  The more violent ones may know their demands.  I have printed their demands as they listed them.  Here are a few responses.

Because there is not a war against black people, you can never meet the demand.  This is a demand leading to never-ending conflict.  There are about 7,500 blacks killed by black on black crime per year.  President Trump and the Congress already passed sentencing reforms to remove unfair sentences for blacks.  The police caused about 12 unarmed black deaths per year that are questioned and some do lead to police convictions.  However, there is no war on black people.  However, there is systemic black racial disparity in achievement and life positions.   This can only be solved by restoring the black family, incentivizing welfare to do this with workfare so poor blacks have stable jobs.  It is by restoring the black family which BLM rejects as a goal.  One huge issue is black education through charters and private schools that delivers the funds to the black parents instead of some very well-funded failing schools.  And of course, for us, the Gospel and the Church are the most important keys.

Reparations mean that the guilty pay.  Who should pay for this?  Most Americans were immigrants after the period of slavery and had no relationship to slavery or Jim Crow.  Should they pay?  Only if being white makes one guilty by skin color which is a BLM theme.  Or should Hispanics pay?  They are a larger and larger portion of the citizens.  Should the Asian immigrants pay for it in their taxes?  It is fair to them?  Should black immigrants from Africa pay?  Who receives and who pays?  Do the African immigrants pay or receive?  This is another demand that can never be met.  New programs to lift the poor in education, job training, enterprise zones, mentoring programs can and should be paid for.  Programs for the poor cannot be racially based, but programs for the poor will most impact blacks.  There is no clarity on this demand and just giving money away will end doing more harm than good.  Yes, we want to lift the poor and the Church has a key role in this.

2. Divestment from the institutions that criminalize, cage, and harm black people; and investment in the education, health, and safety of black people. (Invest-Divest)

This is another vague and impossible demand.  Prison reform has taken place under President Trump, not Obama.  Investing more in public education will be a failure.  Baltimore has the third most funded education per pupil.  BLM does not mean to call for private vouchers or charter schools, but socialist public education being given more money.  As communists, they would be against private religious schools.  The issue is not money but the family and competence in the schools  If their solution was tried, they would end up being just as frustrated. Little progress would be made.

3. Economic justice for all and a reconstruction of the economy to ensure our communities have collective ownership, not merely access. (Economic Justice)

What does this mean?  The founders of BLM are Marxists.  They are demanding socialism.  Collective ownership is socialism.  Or are they wanting to have communal ownership by ethnic groups?  This will never pass and would be unconstitutional, that is to force private property into communal ownership structures, either centralized or decentralized. This is essentially calling for the end of free enterprise. Knowing these folks are Marxists, they probably are talking about equal income schemes.  They could create companies or corporations that would buy businesses and real estate owned by the community as stakeholders.  I don’t think they are thinking of doing this.  That would be an interesting idea

What does this mean?  Does it mean fragmenting Federal, State, City, and County governments and having new definitions of political boundaries defined by race or ethnicity or neighborhood?  It will not happen.  Cities and states will not disband and give up their authority.  Yes, neighborhood associations can have input to the city and state and act, make petitions, and work to change laws for the city.  They can have local neighborhood bodies that do a lot.  But there is no constitutional power to make laws, unlike cities and states.

This will never happen.  What does this mean?  They are asking for segregation in political power so that blacks make their own laws through their own separate votes.  This is a recipe for separatism and turning back the clock on integration.  Since Brown vs. Board of Education (I think in 1954) there has been a steady move in law that justice requires equal treatment and integration. They are now asking for special benefits and re-segregation.  Amazing!

The BLM platform and demands is a recipe for continued poverty for blacks, for increased crime, and more blacks dying.  The BLM organization and its platform is said by some to not be the platform of the protesters who ware seeking police reform.  However, the leaders of the protests in the cities are usually official BLM leaders of the various cities that do embrace the platform and the demands. They support the Marxism. Again, it is a cover and pretext for Marxist revolution. They are using the black community for their ends and have hijacked the legitimate protests for reform.