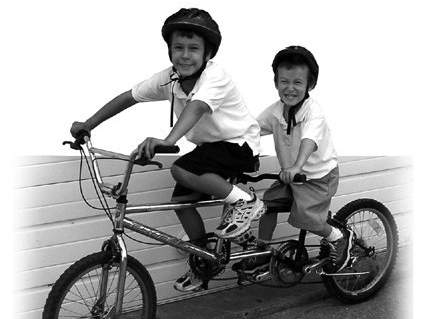 Loyalty begins with the importance of friendship. For 35 years I shared my faith with a Jewish friend from my school days; finally, twenty years ago, this friend embraced faith in Yeshua. For many years it had looked hopeless.  There had been little response, and our conversations were often repeated.  His life was full of sadness and had not developed as he desired. Yet this friend remained important to me.

I was a very overweight youngster who couldn’t have won a popularity contest if I’d tried. However, in my junior year of high school I lost a lot of weight and became very thin. Up until this point, I had been the brunt of many jokes. Yet, my friend and I enjoyed hanging out together, despite the fact that he belonged to the cool crowd. One time he even suggested that I would look great as a bartender with arm bands. There was even a way for a fat guy to look cool! In spite of my total un-coolness, my friend and I walked to school together every day. He did not mind that I was a religious fanatic. I was more accepted by my secular school friend than by the peers in the church where I was born again (that is until I lost weight and drove a nice car). His friendship and support became an important anchor in my life.

Just before going to see my friend twenty years ago, Patty shared that she had a strong sense that my friend would embrace faith in Yeshua during that visit.  It happened as she predicted. My friend has continued on with the Lord since that day. Loyalty produced significant fruit!

Friendship and Family as the Beginning of Loyalty

On the most basic level, human life can only be rich when we are committed to family members or a group of friends. Changing friends every few years is a prescription for an empty life. Loyalty requires treating one another with love and understanding. Many who do not know Yeshua intuitively know that this is true, but are unable to attain success in this. Relationships are broken by jealousy, anger, wounds, lack of forgiveness, slander and more.

Covenant Loyalty to Yeshua and to His Community

When we come to Yeshua, we have a covenant relationship in His blood. We are called to treat all brothers and sisters in Him with covenant loyalty.  However, this does not become concrete unless we seek to be part of an extended community that expresses our new life in Yeshua. Indeed, life in Yeshua is communal. It is critical to find a community where the hearts of the leaders are committed to love and justice. We become loyal to leaders when we perceive their hearts. True allegiance to leaders means understanding and accepting that they will make many mistakes and show much imperfection. The true character of a leader is the more important matter.  Matthew 18 presents us with a community rule so that a proper balance is maintained. Without this, trusting and loyal relationships are impossible.  We are told to go to a brother or sister if they sin (against us in some versions) and to correct them alone. Then we go with another. We are not to spread evil reports about fellow members. Only after a process of seeking reconciliation may the community exclude the unrepentant person.

Loyalty to leaders is especially important, for disloyalty destroys the fabric of community. Leaders are subject to Matthew 18 as well, but reports against leaders must have two or three witnesses. Openness, mutual correction, repentance and forgiveness are crucial in a healthy community.

It is important to note that loyalty can be inordinate. When absolute submission is demanded, loyalty is twisted into cultic control. In addition, we are not to think that loyalty means that we overlook serious sin among members and leaders. The Bible provides us with the boundaries of loyalty and shows where separation is necessary. True loyalty makes room for mutual accountability. Leaders who seek loyalty without justice are dangerous.

My Experience with Covenant Loyalty

Our society is one of fleeting relationships. Even many marriages do not last. Covenant loyalty demands the opposite – a commitment to long term relationships. It is a wonderful thing to be part of the same team, congregation or stream of congregations for many years. I have always desired this to be part of my life. However, we should have an absolute loyalty to God above all. Sometimes His call requires us to move on.

The Lord directed me to leave Pascack Bible Church, in Northern New Jersey when I was ordained in the Presbyterian Church. I joined Pascack in 1966.  Though I was no longer a member, the relationships formed there were important. I have maintained a connection through the years and was their missions’ speaker in the fall of 2007!  It was clear in 1977 that I had to resign as pastor of Adat Ha Tikvah in Chicago. Patty and I had hoped we would be there for a life-time. We had such dear friends. Yet, we can so clearly see that the Lord led us out, and it was necessary. It was painful and should have been. Yet we still relate to some dear friends from that community.

Then in 1981, I could no longer both lead the Union of Messianic Jewish Congregations as President and fulfill my responsibilities as a leader in the Presbyterian denomination. I left the Presbyterian denomination in good standing. I sought the involvement of significant leaders and friends as part of the process of making all of these decisions. I received their confirmation. In my view, to include others in this way is a corollary of covenant love. If they cannot give confirmation, and we have conviction to go, we can at least seek their blessing.

Finally, my quest for a lasting relational base for our ministry was fulfilled most deeply through the leaders of Beth Messiah Congregation in the Washington, D.C. area. God fulfilled the desire of my heart and joined me to a group of leaders who later formed Tikkun International. In just one year, I will have walked in covenant relationship and unity with some of these men and women for 40 years. In addition, what a joy to serve with some of them in Israel! We knew that God was joining us together for the long haul and we were tested in this. Special people have been added to that original core of leaders and expansion has taken place. The ties between leaders and congregations in our stream now reach across the Atlantic.

One can see in the illustration of my life that maintaining long term covenant relationships is an important part of loyalty. Yet it cannot be placed above our loyalty to God and His leading. What if there is a call to the mission field? What if there is imprisonment and communication is lost for many years? Sometimes at great cost we have to sacrifice relational continuity to follow our calling in God while yet hoping that He rejoins us in some way in the future.

We should not be surprised at the importance of loyalty. God is a covenant making and covenant keeping God. He keeps covenant loyalty to Israel forever. We can read of this in the stories of David and Jonathan, the disciples and Judas and so much more. This clarifies for us that God puts a high value on loyalty and covenant relationship of love. It is the substance of life’s meaning.