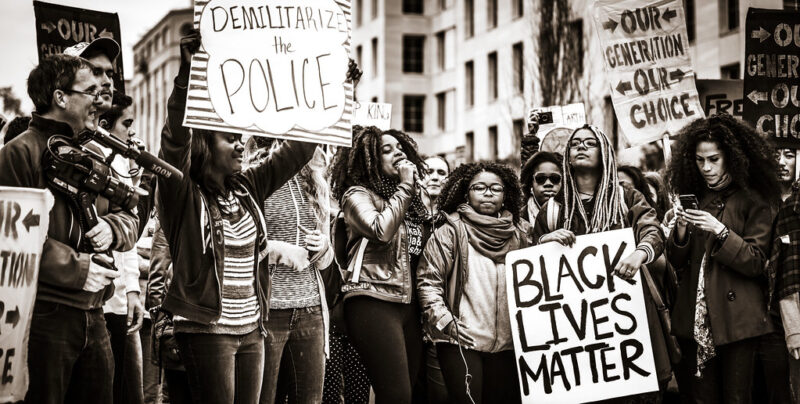 A family relative is a strong supporter of the Black Lives Matter protests and has played down the violence and riots that come more from the mostly white radicals that have hijacked the movement.   My daughter in law wrote a response.   Then she was taken to task for not agreeing with the millions of aggrieved black people but pointing out problems with the protests.  Then my daughter in law wrote a response, and it was brilliant.  She noted that she is a person of color, from Guatemala with Sephardic Jewish, Spanish and native American roots.  She knows well about discrimination.  She was being treated as if she was from white privilege!  How bizarre was that?  She shared personal information on the trials of growing up, coming to America for high school and then becoming an overcomer.  Then she married my son. She gave a valiant defense of her experience, knowledge and right to speak up as a minority person.  Of course, Yeshua made all the difference.  However, the essence of her post was a critique of the selective empathy and rage that ignores the suffering of others that do not fit into the political agenda of the left.  It was brilliant and inspired this post of mine.

When people respond to Black Lives Matter by saying All Lives Matter or Blue Lives Matter, they are vilified.  The right answer instead of vilification might be to say, “Yes, all lives matter, but we are highlighting the injustice done to blacks.”  That would be a valid response.  Then we can look at the stats to see the evidence for how bad the police treatment of blacks is.  We can also examine prejudice otherwise in education, jobs, housing, (not on the basis of stats that show disparate levels of attainment or imprisonment, etc. but on the basis of unfair treatment compared to other people of races in parallel situations of crime or qualification for work, etc..  We will find problems.  What offends some is the callousness toward some who are suffering due to the violent aspects of the protests that do not fit into the narrative of the leftist agenda.  Where is the empathy for the small business people whose businesses have been destroyed by the rioters, and this includes black and other minority business owners?  Where is the empathy for the police who have been killed in the rioting, and indeed this includes black police?  Where is the empathy for their wives and children?  The left media mostly ignores this.  Where is the empathy for those who were employed by some of these businesses and now have lost their jobs?!!  There is also little empathy for those who have been killed in black on black violence including innocent children, 7,500 per year!  Those in these neighborhoods cry out to not defund the police who protect them, even if they sometimes act wrongly. In some cities now there are many black police, in Atlanta a majority but still they are attacked.   Why?  The radical left seeks revolution and reject the black police as part of the evil establishment.

I have noted the very selective empathy of the left for a long time.  Has anyone noticed that the leftist movements are really very self-centered?  For example, it is a good thing that women are free to pursue opportunities according to their gifts and desires, but that the feminist movement does not care about the oppression of women in Islamic countries.  Only Christianity is accused of stifling patriarchy when such stifling patriarchy was historically the case in most cultures and worse than in the West.   Is there concern about the oppression of Hindu religion that keeps the poor in their poverty as their just deserts in reincarnation.  Who cares about the persecution of Christians because they have liberated these people form their oppression?  We could go on and on.  Or who cares about the terrible suffering and persecution of Christians in many lands?  Not on the news!

One of the amazing aspects of the teaching and modeling of Yeshua is the empathy for all who are suffering and in need.  The prophetic thrust of God being with the poor, the widow and the orphan (the marginalized) is given the strongest support as Yeshua brings supernatural healing, deliverance and hope to them.  However, He also can show love for the oppressors.  He heals the servant of the Roman soldier.  The Roman soldiers are the oppressors.  He tells his followers to turn the cheek to the Roman soldiers and to carry the load a second mile when they are conscripted for the task.  This shows the love of God to the oppressor.  He not only eats with prostitutes, who are very wounded, abused and deeply damaged, but eats with tax collectors, collaborationists with Rome and despised by most.  Yeshua taught the way of love and reconciliation but in a context that called for repentance and forgiveness by all.  All hatred was to be renounced.  In the present situation of protests, much of it driven by atheists according to a recent poll, we believers have a special opportunity.  Followers of Yeshua are called to stand for justice but in a context of biblical love that is not selective in empathy.  That empathy is given to all who are suffering in the present, the protestors including the peaceful and violent who are so deceived, those who have been ruined by the violent rioters, and finally to show love for those who oppress, for the oppressor destroys him or herself.  We call upon all to repent and submit to the Gospel and then join in love and reconciliation.   Only the Gospel has the answer, and it is the only world view where real justice can be advanced.  We are not to show selective empathy but do emphasize reaching the marginalized as the first priority.