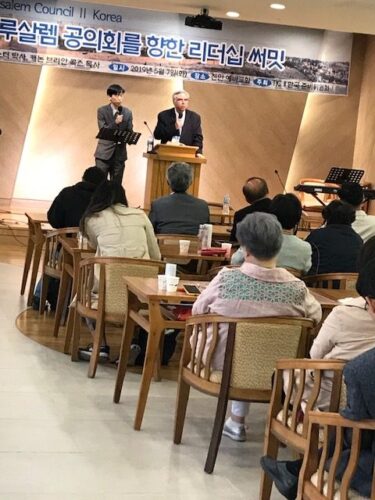 The Toward Jerusalem Council II vision was given to Marty Waldman, the Rabbi of Baruch Ha Shem, the largest Messianic Jewish Congregation in America.  It was 1995 and the vision was to gather the leaders of the church streams in a council to be the mirror reflection of the Acts 15 Council when Gentiles were released from Jewish life and responsibility.  Amazingly the historic Church then declared a few centuries later that one could not continue to live a Jewish life and believe in Yeshua.  This was amazing and sadly this was the history going forward that really closed the door to Jewish evangelism and opened the door wide to Antisemitism.   In Marty’s  vision the churches are called to affirm the restoration of the Messianic Jewish community, repent and repudiate replacement theology and affirm that Jews who come to faith in Jesus are called to identity and live as Jews.  A committee of key leaders was formed to foster this vision.  The committee includes very prominent church leaders.  TJCII as we abbreviate it, has taken us to many nations.  Some of the major leaders of the Church in many denominations have signed on to this vision, including in North America, South America, Europe, East Africa, Korea, Japan and Taiwan.  In 2012 and 2017 I fostered TJCII conferences in Korea for East Asia.  The  important effort this May brought Canon Brian Cox of the Anglican Church and myself to gather leaders for a conference in Singapore.  The whole Council of Leaders for TJCII will gather there to meet to foster the Asian part of TJCII.  My readers can find out more information on TJCII by going to the web site.  There are important booklets and information.

I was most amazed during this trip by my contacts with Chinese Church leaders. I think that this Church is the closest thing to what we see in the New Testament.  There is amazing sacrifice, persecution, power in signs and wonders and growth confirming the Gospel.  It was humbling to meet with seasoned Chinese leaders, some of whom came from the mainland to meet with us.  I had opportunity to preach in the Resurrection Church formerly under Dennis Balcombe, and now his son in law and daughter, who have had a profound effect in fostering the work of the Spirit in China.  The responses in Korea, Japan and Singapore were also very special.  We are also reaching into the Anglican Churches of Asia and Africa.  The 19th century Anglicans had a great vision for the restoration of Israel.  Eventually I will write about the Anglican Church.  Yes, it is liberal in England and with the American Episcopal Church (which in in my view is heretical) but in Africa and Asia the Anglicans are on the cutting edge and solidly committed believers.  The new Anglican Church of North America is biblically true.

When people support our ministry, Restoration from Zion, they make these efforts possible.  This is why we urge you to become a partner and visit our web site, Restoration form Zion of Tikkun Global.  Use the button to sign up.