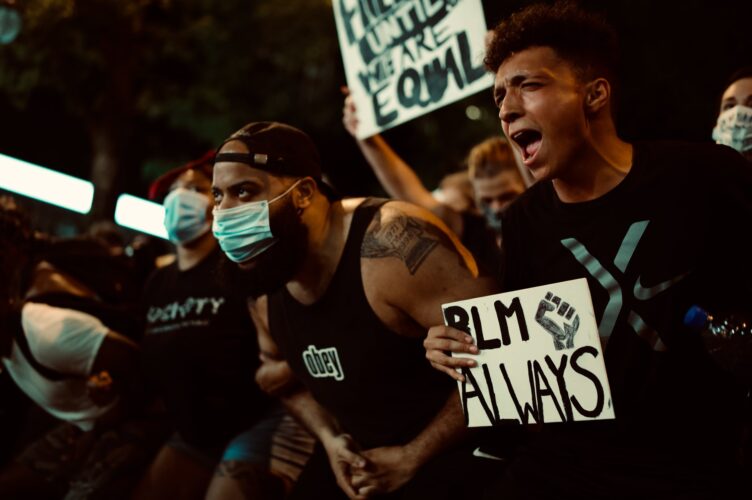 A few years ago, we bought a house in Kansas City, Missouri.  It is our base for travel in the United States and South America.  The prices are the best, so inexpensive for a very nice neighborhood!  We have the basement for ourselves and rent the upstairs.  We noted that some have Biden/Harris signs.   There were no Trump/Pence signs.  It is too dangerous since the leftist (not all Democrats) will remove the signs, burn them or even vandalize the house.  You can see a few pro-Trump people, but their sign says, “Vote Life.”  However, there is another sign that has been put out by Democratic Voters.  It is a whole philosophy in a nutshell.  It says,

No human is illegal

Before my analysis, take a self-quiz and ask if you can interpret each phrase.  Here is my attempt.

I can unabashedly say, Black Lives Matter.  And indeed, I can understand that saying “All lives matter” is not a fair response because the proponent is calling attention to black lives.  However, the majority of people in this movement do have a slant, and being really accepted in the movement is buying into the slant.  It is that the primary problem of the poor black community is police racism and brutality.  It is a significant problem with a minority of police and I supported black Senator Tim Scott’s reform bill.  But I don’t believe that systemic racism and the police are the primary problem.  I think the primary problem is that that many need the Gospel.  The other issue is policy, bad policy that does not end the killing of black on black crime and provide real education and jobs.  Yes, there is racism, but I disagree with how the issues are framed.  I follow great civil rights leaders like Robert Woodson on this.

Love is Love is a pro-LGBTQ statement.  If you study the biblical term for love in Hebrew, Ahava, it is indeed true that this word is used for all kinds of love, both loving good, and loving evil.  All love is not good. Some love is good, and some love is bad.  We are commanded to only love what God loves and reject what God rejects.  The command for us to love is based on a biblical definition which I have summarized.  “Godly love is passionate identification with others that seeks their good guided by God’s Law.  Their good is God’s good intended destiny for them.” In this regard, we seek only to endorse love within the boundaries of God’s will.  No, not all love is legitimate.

Women’s rights are Human Rights.  Amen to the statement but not their meaning.  Do I want to see women treated well, not abused, not treated as sex objects, and given equal wages for the same job?  Absolutely.  But underneath this statement is abortion as a human right.  Women’s rights do not extend to killing another pre-born human being.  This will coarsen the whole culture, leads to God’s judgment, and has a connection to future infanticide (this is being defended now by some), killing the old and those who are handicapped.

No Human is Illegal.  Well, of course, every human is legal as created in the image of God, but not all immigrants are legal because they did not come legally.  So, there are legal and illegal immigrants.  There are various responses to this from people who believe in open borders, to legalizing the dreamers, children who grew up here, to legalizing people who are here, productive and long-term residents.  This can be argued while securing the border and controlling the number of immigrants in the future according to the absorption capacity of the country and not undercutting the jobs and wages of the lower-income people.  It is also important to keep out criminals, drug dealers, human trafficking, and violent gang members.  These people harm Hispanic immigrants the most.  This phrase, with some, is a call for open borders.

Science is Real.  I am a student of the theory of knowledge, epistemology.  As part of that, we study the nature of science.  Scientific conclusions are rarely settled conclusions and new information is often changing the conclusions.  This statement is a call to bow to the prevailing opinions of science, sometimes propaganda masquerading as a science like the opining that transgender surgery is safe and good, or that children with gender dysphoria have enough of a clue to choose their gender (the great majority grow out of it if given the chance).  On COVID and how best to overcome it, and on global warming, there are credible scientists who disagree with prevailing opinions and how best to respond.  We need to hear them and not cancel them.  This statement is really an anti-science statement.  It is rather saying, completely support the prevailing public media opinion on what science is saying.  This would be the end of much scientific progress.

Kindness is Everything.  No, kindness is not everything.  Loving God with all your heart, soul, and strength and mind is everything and then “loving your neighbor as yourself.”  Love is defined by my response to the “Love is love” statement above.  God tells us to not be kind to people who do capital crimes in the Torah.  Kindness to such criminals is cruel to the victims.  Kindness itself is usually very good and important but it also has to be exercised within the boundaries of the will of God.