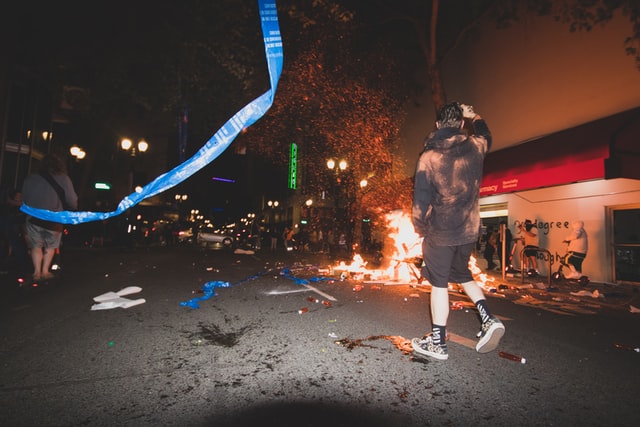 In recent days I have become convinced that we are witnessing a Marxist/Anarchist revolution in the United States.  My Facebook readers will note my developing thought on this. Some say I am too alarmist, but I do not think so.  It is not easy coming to terms with what is happening while living in Israel.  I believe that this Marxist/Anarchist revolution and its leaders are using the outrage over the outrageous death of George Floyd to foster a revolution and that a significant number of blacks are being duped and manipulated by the radicals.  One of the characteristics of the leadership of BLM is fostering a lying narrative about the police.  The evidence seems true that blacks are unjustly mistreated by police.  The testimony of so many, including Senator Tim Scott, is that blacks are targeted for police involvement without justification.  The evidence also seems clear that blacks experience unjust police brutality beyond whites and in ways that cannot be explained only by the much higher crime rate in poorer black neighborhoods.  This then provides a hook for the lie, the lie that is put forth that blacks are murdered at high rates, that especially white policemen have murdered many blacks in recent years.  Yet this is the big lie.  I noted the letter by ten state Attorney Generals that present these statistics.  “In 2019 there were nine fatal shootings of unarmed blacks (down from 38 in 2015) and 19 fatal shootings of unarmed whites (down from 32 in 2015).  These deaths represented 0.1 percent of all back homicide victims and 0.3 percent of all white homicide victims.”

These statistics are stunning.  Attorney General William Barr said that of these nine or ten, only 4 were charged as criminal murder.  For those who care about black lives, the much greater concern is violence in the black community, over 7,500 black on black criminal killings per year.  This is really the issue of black lives. Those killed include a significant number of children caught in the crossfire.  Bill Bratton, who had led police in several cities including New York and Los Angeles, was responsible for the police methods that saved thousands of black lives in New York.  He recently noted that the attacks on police, cutting back funding, and destroying all they learned and accomplished will lead to many deaths and a return to the 1980s horrors.

So why do we not see the importance of the police?  Yes, there can be reform and the firing of bad police.  However, the safety of the most vulnerable populations requires a large presence of community police who build relationships in the neighborhoods.  Only then can investment and educational choice really do its work. (Educational choice is crucial,) Who is responsible for demonizing the police?  It is the people who lead Black Lives Matter and other radical groups like Antifa.  They drive the big lie of white policemen are murdering blacks in large numbers.  Then what are we to make of the great accomplishment of adding many black police?  Black police are despised by this movement. The New York regional leader of BLM, Hawk Newsome, stated that when a black puts on a police uniform he is no longer black but blue. In Atlanta, 58% of the police department is black, but they too are to be despised and defunded.

Then one only needs to do a Wikipedia search of the three primary leaders of the national BLM Foundation, Alicia Garza, Patrisse Cullors, and Opal Tomati.  One will find the most radical radicals.  When you read their agenda goals, saving black lives is really not primary.  It is rather a total anti-America agenda, including open immigration (which hurts the underclass blacks the most), emptying out and closing prisons, and enforcing a radical socialist anti-capitalist or communist direction. As was said in their marches note long ago on police, “pigs in a blanket, fry ‘em like bacon.” BLM is pro-LGBT (what has this to do with saving black lives?) anti-favoring the hetero-normal family (traditional family, note that Tomati is a leader in fostering the queer agenda as well).  The only just order is a socialist/communist order.  The reason in this analysis that there is a black underclass is capitalism itself.  This leads to two very important directions.  As in all communist revolutions, one must tear down and despise the cultural symbols that give society a consensus of revered symbols and common national purpose and identity. Tearing down the statues of confederate leaders can make rational sense.  However, the statues of Washington (he owned slaves and that is to be the total sum for evaluating the founders of the U. S.), Jefferson and Lincoln? Lincoln?  Yes, he ordered putting down a Native American rebellion. Then there is U. S. Grant, who won the war and passed legislation to empower the blacks in the south.  Well, you just cannot revere any who believed in America.  Let’s do a thought experiment.  Let’s say that we were to only have statues and monuments to American leaders who were anti-slavery. All others would be taken down.  Then we would replace them with the great figures of John Adams, John Quincy Adams, Charles Finney, the revivalist, Jonathan Blanchard, the founder of Wheaton, Secretary of State Seward under Lincoln, who housed runaway slaves.  There is a large number of such people!!   Do you think the BLM and the Antifa movement would really want this?  No, they want to reject America and its whole history as rotten to the core, but the issue is that American history is a mixture and anti-slavery giants are part of that history and ultimately prevailed.  The human rights ideas of the slave holder Jefferson ultimately led to the emancipation ideas of Lincoln. So, we don’t want to even honor that?

Then why is the anti-police rhetoric so strong.  It has nothing to do with black lives. Read between the lines and read the lines themselves vilifying black policemen.  It is that those who maintain law and order are part of maintaining the American capitalist system.  It is too bad that 7,500 plus blacks are killed, but black lives are not really the issue. All lives will supposedly be better after the American system is destroyed.  It will be replaced by the open borders, consenting adult sexual arrangements, and government support that will be so wonderful that those killings of blacks will go away too (I have not read this last argument on black on black crime but certainly the blame for this would be the capitalist system).

The black community is being used and lied to through the powerful tools of social media by people who have an agenda that is not really about black lives.

So how do these leaders evaluate the politicians and the corporate leaders who give them support and money?!   They are the useful idiots in Lenin and Stalin’s terms.  For now, the liberal Democrats play a role in allowing them to do as they do, and they even yield to their pressures.  They are progressing through the liberal Democrats. They support their efforts at cancel culture, to cancel all who oppose them, or to put forth conservative alternatives to solve the problems.  Social media marginalizes the conservatives.  The left controls the campus.  Corporate sponsors are also useful idiots.  Kimberly Strassel in her great book, The Intimidation Game, shows how this works.  Threaten the sponsors of conservative media and they will defund conservative media. The conservatives will buy their products anyway, but the corporate leaders believe they do not need the protests of the radicals.  Even Chick Fil A succumbs!  Conservatives are so weak in comparison to pressuring corporations.  Republican leaders are despised as weak in their push back, and that is true.  However, accept for Democratic radicals like the squad, the Democratic liberals are really useful idiots who they plan to discard at the right time as they present radical candidates to displace them.  They can use some of them now.

This whole agenda is an anti-God agenda that does not believe that God designed us and that true standards of justice are in the Bible.  Christianity is despised. White Jesus statues and stained glass pictures must come down.  As a Messianic Jew, I recognize that Jesus probably looked like a Middle Eastern semite, neither black or white.  However, that the Jesus of art was from white supremacy is so stupid but it is seriously put forth by Shawn White of BLM.  The Jesus images we know in art came from the feudal ages, not an age of white supremacy and conquering.  In Ethiopia in the same era, Jesus was black.  All cultures make a Jesus they can relate to.  For Jews, we don’t want the image!  But you get the point.  There is a hatred of Christianity. BLM leaders embrace BDS toward Israel as part of their intersectionality craziness that sees all oppressed people as being one and under the thumb of the colonials. Tell that to the Tibetans!

If the radicals won, they would produce a truly brutal police state to enforce their visions of equality. Then it will become criminal. This is always the result. But even now the Democrats do not oppose them a but empower them. The Republican push back is tepid. And the Church is hardly doing much when millions should be on the street, speaking for blacks, preaching the Gospel, and calling on the radicals to repent and turn to God.

In my view, this is the time of the greatest danger to America since the Civil War. There was also much danger in the 1930s with many communist radicals but Roosevelt found a way to lead through this.  Then in the 60s again, we had a radical uprising.  However, never before have we had the left in control of the culture formation institutions of the society, media, education, and entertainment.  They have overwhelming control.  What can we do?

We can pray, prophecy, witness and invest ourselves in caring for the marginalized. Then we can look at Isaiah 60. This is God’s final word for the end of this age and focused on Israel, but has been partially fulfilled again and again in history.  “Darkness shall cover the earth, deep darkness the people, but the Lord will rise upon you and the Glory of God will shine upon you.”  We cry out for revival and return to Biblical truth. Never in history has the evidence for Biblical faith been stronger. The proof of design in biology, the outpouring of miracles in many parts of the world, and the bankruptcy of secular humanistic solutions is more and more clear.  The movement we now see shows the bankruptcy of the rejection of God and the Bible.  Let God arise!   Note that the values foundation of the radicals is by their emotional preferences.  It hangs on thin air and is simply their personal choice and preference.  The value of every human being, to be treasured and supported in love, is based in the Bible and only from God and the Bible do we get the words of the Declaration, penned by Jefferson, “That all man are created equal and endowed with certain inalienable rights, the rights to life, liberty and the pursuit of happiness.” And might I say that lasing happiness is found only in God!!