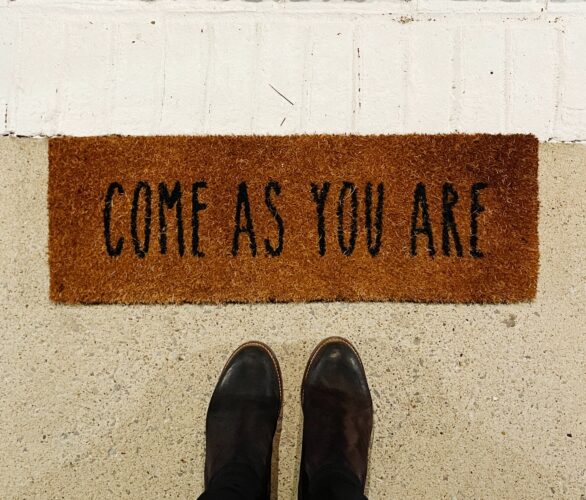 I spent my teen summers at a famous Camp at a beautiful lake in the mountains.  I eventually became a counselor.  The pattern for the meetings, especially in the evenings was the same every week.  On Saturday through Tuesday, there was preaching and an invitation to receive Jesus.  All were encouraged to come forward and be saved. It was clearly stated that nothing was required, just to accept the forgiveness of sins by accepting God’s free gift. Why would anyone refuse?  No life change was required. What have you got to lose?  In the cabin counseling before bedtime, we taught that they were now saved if they believed or received, could know that they had eternal life (I John 5:13), and could never be lost no matter what they did after.

From Wednesday through Friday evening the preaching changed.  All were exhorted to dedicate their lives to the Lord.  This was not required but if you wanted to live a truly meaningful life, if you wanted rewards in heaven, you needed to dedicate your life.  After all, Jesus did, how can you refuse to dedicate your life?  Many did, but many did not.  They accepted salvation without dedication.  I did not realize it, but this pattern was based on classic Dispensationalism and its hyper-grace theology.

Years later, I read an article by a famous Hebrew Christian.  He argued that nothing was required for salvation, no repentance or dedication, but only belief or faith that Jesus died for our sins and rose again so that by faith we accept that salvation.  Salvation is by believing alone. I wrote about his article.  A Messianic Jewish colleague wrote back and said I had slandered this leader.  He did not understand the hyper-grace view of classic Dispensationalism.  I sent him the article. He was amazed.  He did not realize such things were taught. He admitted that I accurately repented to him. There are famous hyper-grace teachers today.  Peter’s words in Acts 2, “Repent, be baptized and you will be filled with the Spirit” were claimed to not be a pattern required for salvation or desired for preaching salvation.

This wrong theology came from John Nelson Darby, the founder of Dispensationalism.  He was not the first to teach it.  The Puritans of Massachusetts condemned Ann Hutchinson for heresy for teaching such a theology or so they claimed.  Darby believed he discovered this in the New Testament, especially in Eph. 2:8, 9. “For by grace are you saved through faith and that not of yourselves, it is a gift of God, not of works lest any man should boast.”  If a change of life was required before or after believing or if repentance was required before believing, then there would be works required for salvation.  Believing was not considered a work.  One could sometimes read Luther as teaching such a doctrine, but other writings in Luther did not teach this.  All of the passages that spoke of salvation by grace were so interpreted by Darby.  Grace was undeserved favor that gives us salvation without any pre-requisites or post-requisites.  This was contrary to the greatest historical theologies, both as taught by Arminians (who emphasized human choice in being saved and who were mostly represented by Wesley and the Methodists) and Calvinists who emphasized predestination to salvation.  Anglicans in the 39 Articles also embraced quite a different view than Darby.  For all these folks, grace is a power of God at work that leads to repentance and transformation in a dedicated life.  It is more than just unmerited favor.  For Wesley, the grace that comes before salvation enables us to make a choice and gives us the ability for a faith response. Such a response includes repentance and dedication.   For Calvinists, God’s grace determines both repentance and dedication.  The converted will persevere or live their lives more and more conformed to the image of Yeshua.

Why did Darby break from historic theology?  He really believed that he discovered a key to Church renewal in his grace doctrine.  He saw dead Anglican Churches in the United Kingdom. Many were going to Church as a requirement for salvation, but they really were not on fire for God. They took the bread and wine, the eucharist, to maintain salvation.  However, Darby believed that once free grace was known, he could build a church where only those who freely dedicated their lives would come. Those who only wanted mere salvation would leave but would still be saved if they believed.  It did not work out that way. Actually, there were many carnal Christians in the Dispensational churches, a category of saved people in Darbyite theology.

The famous non-Charismatic Evangelical, John McArthur from California, broke from this teaching and stated that the decision for salvation is inseparable from the decision to be a disciple.  One cannot be saved without such an intention.  The great Dietrich Bonhoeffer agreed and called any view less than this, “cheap grace.” Hyper-grace Dispensationalist Zane Hodges wrote a response to McArthur entitled Lordship Salvation.   He sought to refute McArthur and the idea popularized by Bill Bright of Campus Crusade, that one must accept Jesus as Savior and Lord.  The famous revivalist Leonard Ravenhill responded to Hodges’s book and called him, “insane Hodges.”

Outside of the classic Dispensationalists, this hyper-grace view is rejected by almost all biblical scholars.  Yet, hyper-grace views are still common.  There are famous media preachers who proclaim it today.  The response to this is found in two major presentations.   The first presents an understanding of the Gospel of the Kingdom.  We will have to cover the Dispensational idea of the Gospel of the Kingdom in a future essay.  Suffice it to say here that classic Dispensationalism does not believe that the Church is to preach the Gospel of the Kingdom today, but the Gospel of the Grace of God. However, as summarized by George Ladd in The Gospel of the Kingdom, the preaching of Yeshua proclaimed that the Kingdom of God had broken into this age in a partial but real way, though it would come in fullness when He would return.  People were called to experience the Kingdom in the present time, and this was the Good News.  Dallas Willard in his great book on discipleship, the Divine Conspiracy, presents the fact that the basic Gospel is an offer to enter into and live from the Kingdom of God. One enters that Kingdom through the Door, Yeshua, through his death and resurrection and by being filled with the Spirit.  As one lives in and from the Kingdom, Jesus is Lord and everything in one’s life comes into the right order.  A disciple is then one who obeys the commands of Yeshua.  Matthew 28 sends the disciples to disciple the nations and to teach them to obey all that Yeshua commanded.  Embracing the Gospel is embracing, through the power of God’s grace, the Lordship of Yeshua, and his power for obedience.

The second approach where Yeshua must be received as Lord is represented by Matthew Bates in his great book, Salvation by Allegiance Alone. He exhaustively studies the word faith and the texts on faith and concludes that faith means allegiance in most passages.   Salvation by faith means pledging allegiance to Yeshua as Lord, and yes, accepting his atonement and empowerment.  There is no salvation except by this pledge of allegiance.  By this pledge, a person commits to discipleship or obeying all His commandments.  One is saved by allegiance to Yeshua.

Hyper-grace is a false doctrine.  It did not deliver the churches from carnal Christians.  Persecution might accomplish that.  Revival preaching that brings conviction and deep repentance can help accomplish this.  We are thankful for the many hyper-grace Christians who dedicated their lives and had a great and good impact on the Gospel, but the error did produce great harm.

Let us be aware or be sensitive and discern when the wrong teaching of hyper-grace is put forth.  Let us return to the true Gospel of grace which is also the Gospel of the Kingdom.