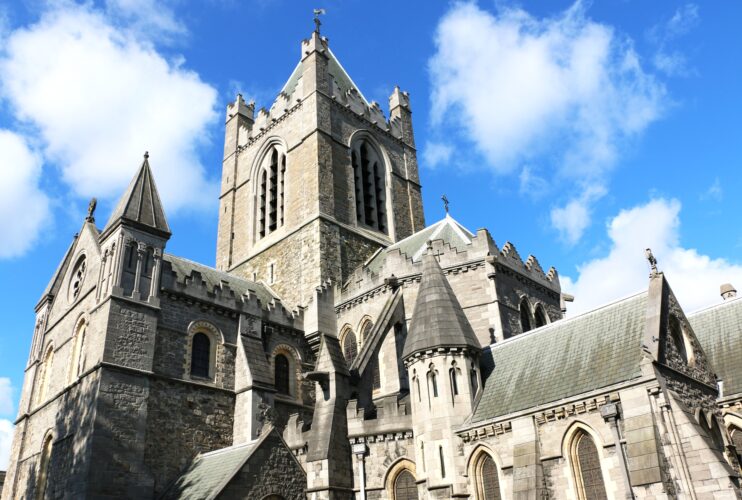 Institutional Christianity includes all the streams of Christianity that are organized into associations of congregations, ministries, leaders and missions organizations.  It includes everything form the Roman Catholic and Eastern Orthodox Churches, to Protestant denominations and those more recent associations called apostolic streams.  It includes missions agencies which also are institutions, and missions movements like YWAM, or Youth with a Mission.   Even independent congregations that are in no association are institutions with a defined order of government, services, and leadership.  In a sense, there really is no Christianity without institutions and that is true of Messianic Judaism as well.

As Messianic Jews that identify with apostolic and prophetic restoration, our identification with the Church (the Ecclesia) is mostly with the churches that developed out of the Protestant Reformation.  We believe that the Reformation began a process of return to a more accurate understanding and application of the Bible.  So we find fellowship not only with individuals but desire and are open to corporate relationships with all institutional bodies that are founded on the historical Reformation standards that defined true biblical faith, such as justification by faith, being born again, and the full authority of the Bible as our final authority for faith and practice.   The Reformation eventually had a very positive effect on purifying and bringing positive change to the Roman Catholic Church.  However, sadly from the perspective of the first Reformers, Protestantism fragmented into multiple institutions, some due to conscience.  They were committed to practice truths that were not permitted in their former institutions.  Sometimes they people separated for very unnecessary reasons.  So today there are Baptists of many associations, Methodists, Anabaptists, Pentecostals (many different associations), holiness denominations,  Christian Missionary Alliance, Free Church Associations and we can go on and on.  Some say there are thousands, but most today world wide are connected in some way to Pentecostal and new apostolic streams.   We are sad for the unnecessary fragmentation since the Reformation, but do want to acknowledge all that has come form Institutional Christianity.

Institutional Christianity has also provided us with creeds, confessions of faith and models of government.  Some say that they reject creeds and confessions of faith.  They say that they simply accept what the Bible says.  Hence they have a one article confession of faith, the Bible is true.  However their approach in finding truth in the Bible came from the Reformation and was fostered by its institutions!  When one studies history, it is very clear that this is wrong headed and simplistic.  Multiple cults and heretical groups claim to believe the Bible as their authority.   Creeds and confessions wonderfully sift out those who are rejecting foundational Biblical truths.  They distill biblical faith foundations that the association or institution of congregations and ministries believe are crucially required affirmations to protect from dangerous error.  Some statements were also partly a just response to heresy.

In addition, there are theological classics and devotional classics that are amazing and wonderful.  These are from people connected to Institutional Christianity and would not have been written or preserved without Institutional Christianity.  These are the writings of people who have reflected on the meaning of Yeshua and New Covenant realities and have formed the Christian traditions of understanding over  many centuries.

So how do we approach the institutions of Christianity.  We recognize a law that great efforts of progress in the Gospel in the world require the coming together in associations.  There has to be institutions.  Therefore we are profoundly not anti-institutional. We also follow the command of Romans 13, “to give honour where honor is due. “  So in our seeking partnership with congregations, denominations, and streams, we want to first be educated about all the good, beautiful and true things that have come from their institutions.  Honoring and humility first opens the door for relationship and mutual blessing.  This includes honoring that in their creeds and confessions that provided a stable framework for their association and mission.  While we do not accept everything in some of these faith confessions, we seek to be open and embrace that which is true in these confessions, and to have our own statements that reflect our agreement and our distinctions.   We also learn form their governmental structures and seek to compare these structures from what we see in Scripture and early second century history.   There is much wisdom in such structures.  However, we will seek to apply this wisdom in our own institution in the way that that fits our convictions.

Though we do give such honor, we also are committed to be honest in love with regard to the failures of Christian Institutions.  So this is where our relationship might lead to correction.

First of all, we are deeply grieved by the history of teaching in Institutional Christianity that was Anti-Semitic.  The Roman Catholic Church has official repented of this teaching and now affirms the election of the Jewish people.  Sadly this legacy of the Catholic Church was not overcome by the Reformation, but Luther and less so Calvin but Calvin as well, carried on the teaching of contempt for the Jewish people.  The failure to understand God’s love for the Jewish people and their ongoing election has been the most grievous failure of the Institutional Churches.  But this is not true of all institutions.  Puritans to various degrees overcame these errors, as did Moravians, Methodists and Pentecostals.   Yet even those who overcame the error of Anti-Semitism and declared that the Jewish people were still elect of God, did not come to see that continued Jewish life in the New Covenant was ordained of God.  We are thankful for Church Institutions today that do affirm the truth on these matters and we especially are thankful for the Four Square Churches, the International Pentecostal Holiness Church, and various other apostolic streams that have explicitly affirmed the truth.  We seek the alignment of Church Institutions with Israel and the Messianic Jewish community.  We are called to be one.

Secondly, due to historic Anti-Semitism, the many in institutional churches have not been diligent, in their seminaries, colleges, training schools and Bible colleges, in seeking the original Jewish context for interpreting the Bible.  We still see such trends in some circles where the value of the Hebrew Bible is just not perceived, and where wrong hyper grace teachings are put forth (for correction see Michael Brown’s great book on hyper grace or Walter Kaiser on the Rediscovering the Unity of the Bible).  This produces a wrong understanding of the New Covenant Scriptures.  We are thankful for those prominent Christian teachers and scholars that are clear on these issues.   We want to make it clear that we do not think Protestant Evangelical Christian traditions of worship and celebration are pagan, wrong, due to being on the wrong days (weekly Sunday celebration and annual celebration of the resurrection).   Everything that celebrates Biblical events, teaching or more is good.  We affirm all that is good.  We are not teaching that the churches have to take on the Torah calendar pattern of life.  However, Christian feasts are rooted in Jewish Biblical contexts.  We believe it has been a mistake to not tie Good Friday and Resurrection Sunday to Passover and First Fruits through clear reference and teaching.   Even the Feast of Pentecost is often disconnected to the Biblical feast of Succot.  We do believe that teaching on the fall feasts and identifying with the Jewish people who celebrate them is important for the grounding of Christians.

Thirdly, we are concerned for the fragmentation of Protestant Evangelical-Pentecostal, Charismatic Christianity.  We would urge all to look to the example of Count Ludwig Von Zinzendorf, the leader of the Moravians.  He anticipated so much of what we want to see.  He emphasized deep passion for Yeshua, the Unity of the Body of Believers and real effort to overcome fragmentation and come to what we call cooperative unity, world missions and love for and missions to the Jews.  Yes, he even affirmed the continuation of Jewish life in Yeshua.

We believe in the last days that there will be mighty apostles and prophets that will call and lead the biblically true institutional churches into cooperative unity in every city and region and that this restoration will include alignment and deep unity with the Messianic Jewish community that is part of the One New Man with them.  We are glad already to see such cooperative efforts in different parts of the world in such bodies as The World Pentecostal Fellowship and the World Evangelical Alliance.   These two overlap.

The churches are corporately the children of the Jewish people.  They were born out from the Jewish people from Pentecost (Sukkot) in Jerusalem.   The first world missions were led by Messianic Jews.  The Jewish people are the corporate parentage of the Church and hence the churches that historically developed.   Yes, we seek repentance for what was and is wrong, forgiveness and reconciliation.  But we also seek to do this with honoring an affirmation of every legitimate church body that teaches biblical truth and does the true works of God.