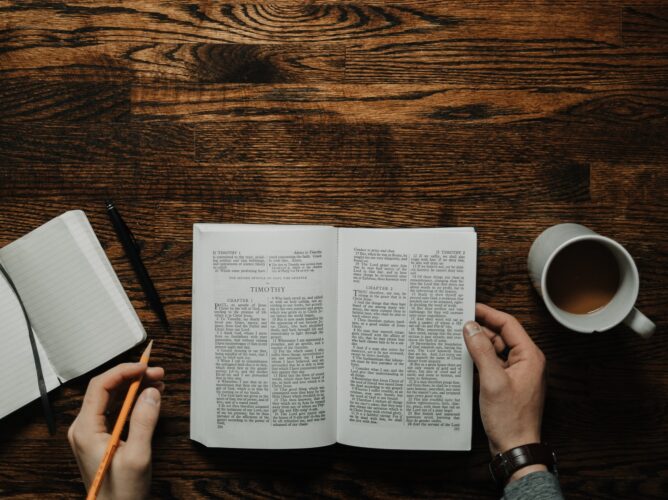 When I was a young leader in Chicago at Adat HaTikvah, we rented from a Presbyterian Church.  I was at that time an ordained Presbyterian minister with hopes of influencing the Church to return to a more Evangelical orientation.  The Pastor of the church was a homosexual who argued that the Bible was written a long time ago before our more advanced knowledge of psychology and genetics.  We would have to adjust our moral stands to take into account this greater understanding.  We maintained a friendly relationship.  I did not know any details about his personal life.  However, in the Presbytery of Chicago, I was part of a vocal contingent that argued against this new re-adjustment.  Most of us who so argued had a high view of Scripture, that every text taught the truth when understood according to the claim of the author in context (inerrancy-see my summary in Dan Cohn-Sherbuk, Voices of Messianic Judaism, “Biblical Authority” 19-28).  Those who argued against our view had a lower view of Scripture as containing revelation, but an imperfect book.  Though we held off the moral revisionists for a season, they eventually prevailed.  They controlled 6 of the 7 major seminaries of the denomination.  Then I observed the rapid decline of the denomination (I left in 1981 on good terms).  From 5.5 million members to under 2 million, but in real terms today, maybe only a million.  There was a profession of respect for the Bible, but generally, the idea was that we must negotiate a position that accommodates modern culture.  Many other mainstream denominations also took this direction with similar declines, such as the Episcopal Church, from 3 million to under 1 million.  It was then that Dean Kelly wrote his monumental study, Why Conservative Churches are Thriving.  This is not as much today as conservative churches in America have switched to a feel-good Christianity rather than the radical call to the cross and discipleship.  However, we learned from those years of steep decline from 1975 to 2005.

Many of the early leaders in the Messianic Jewish world were trained in the best of Evangelical institutions.  They entered their work of evangelism, planting, and pastoring holding to a high view of Scripture with confidence that on the foundational issues of theology and morals Scripture was clear (the two are intertwined) and that the consensus of the Church throughout history on these matters was firmly established.  My own professor and mentor on biblical authority was the Dean of Trinity Evangelical Divinity School, Dr. Kenneth Kantzer, whom I consider the finest teacher on these issues in the 20th century.  Dr. Walter Kaiser, who later became the President of Gorden Conwell Seminary, was also an influence.   Dr. Kaiser was one of the early teachers in our Messianic Jewish yeshivot.

One other book was a seminal influence, Christ and Culture, by H. Richard Niebuhr.  Niebuhr argues for respecting cultures but with the centrality of Christ and his teaching being the key for what is discarded and what can be redeemed and transformed.  He argued against the liberal orientation where Christ is subsumed under culture so that what is left is not a vibrant biblical orientation.

This all produced a foundation for me and many others where we seek to understand the universal absolutes of Biblical teaching according to its own context of cultural background for interpretation.  Then we seek to present those claims, including the claims of the Gospel, in the most relevant way, but without compromising those absolutes.   Many who do not believe in the full trustworthiness of Scripture cannot over the long time succeed in this work but will in the end compromise Biblical teaching to accommodate the culture.  It is not that there is new evidence in the culture really refutes biblical teaching.  Rather the strong cultural push against historic biblical morals is a matter of propaganda.

Today we face a new shaking, and the Messianic Jewish world is not insulated from it.  The center of it connects to sexual identity agendas which are being given an enormous propaganda push by the left.  It includes such matters as the push back against the traditional teaching of Yeshua that God’s standard was lasting marriage without divorce of one man and one woman for life (Matthew 18); the rejection of pre-marital sex and cohabitation without marriage, and the clear standard of Torah that rejects confusion in regard to the identity of male and female.  This also includes a more tolerant acceptance of abortion. Those denominations that have embraced a cultural accommodation in steady decline.  No Church stream that is growing in evangelism and discipleship (Kingdom expansion) has embraced the cultural accommodation.  This includes Africa, India, China, East Asia, Southeast Asia and South America.  For all who are confused or in these wrong orientations, the power of the Gospel offers deliverance though repentance and submission to Yeshua.  His word remains, “Repent for the Kingdom of God is at hand.”  I just do note that the formation of the new Anglican association, GAFCON, our of African and Asia is now the growing segment of Anglicanism and has totally rejected the liberalizing trends.

This also relates to the Messianic Jewish approach to halakha.  I accept the fact that there are new situations presented by today’s society that require thinking about how biblical principles apply to new situations.  How do we apply the principles of the Sabbatical year and Jubilee to a modern age when the situation of agriculture is so different and wealth distribution cannot be done by a return to ancestral land?  How do we deal with medical issues that were never even considered in ancient days such as artificial insemination, or genetic medicine to produce cures?  What about cloning?  What about extending life through genetic manipulation?  Also, how do we apply biblical injunctions on caring for the environment?  What is consistent for Jewish people in keeping the Sabbath today and not working and what is not under the New Covenant consistent with Shabbat observance.  But halakha must not come up with adjustments or changes in Biblical absolutes such that spoken by the word of Yeshua that we make void the Word of God through our traditions.  Rabbi Lawrence Schiffman in his From Text to Tradition,  clarifies that though the Torah has a high place of authority in Rabbinic Judaism, Rabbinic authority superseded biblical authority.  This we must not allow.  If we do, we will slide into decline just like the mainline denominations.  Of course liberal Judaism has made this radical adjustment.

All of this relates to how we approach all the issues of LGBTQ people.  Reaching out in compassion is crucial.  Accommodation in a way that could be taken as accepting ways of life that violate absolute biblical norms must not be done.  Not only would such accommodations lead to our decline, but we would be lending ourselves to the possible damnation of those Yeshua came to save, whose salvation depends on repentance and seeking to live by biblical norms.  I am for the accommodations that welcome inquirers into our midst, but our evangelism to these groups will no doubt be much more connected to developing relationships outside of the meeting spaces of our communities.

On a practical note, the fact of aberrant sexual orientations should be understood in a multifaceted way.  There are many factors that aid in ministry.  Some can be due to just being born after the fall such that design in creation is marred.  God has power for us to overcome such handicaps.  Secondly, there are environmental factors, upbringing, and the earliest memories.  Thirdly, there is demonic power though in a modern world we do not like to realize that there is very powerful demonic forces at work.  There are intergenerational negative inheritances.  Then there is a too rigid cultural definition of what counts as male and female ways of living.  On a ministry-level, there is much needed.  I recommend studying the writings of Messianic Jewish Scholar Michael Brown, Albert Moeller (former head of the Southern Baptist Association), and the pastoral writings of Leanne Payne.