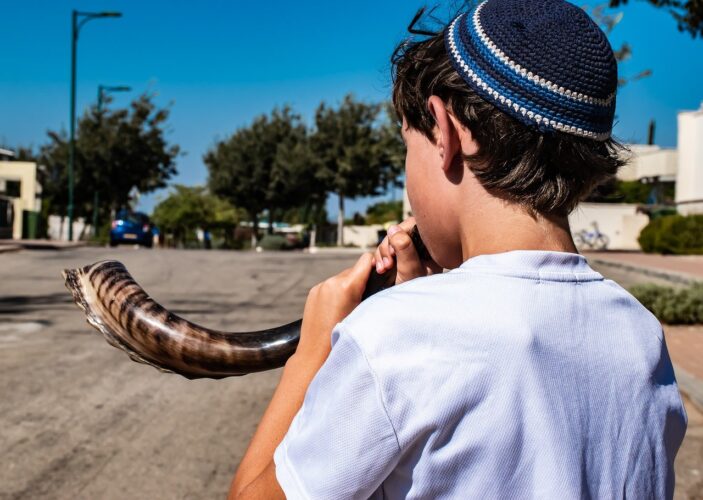 I am sitting in my study.  This morning during devotions, I was reflecting on Rosh Hoshana. Once again, this year is not the normal Rosh Hoshana where were we go to services, sing liturgy and hear the sound of the shofar.  The Delta COVID spike has changed that for us. I loved our gatherings when I was leading our congregation in Maryland.  We had such wonderful times of worship with a Yeshua-centered liturgy. The presence of the Spirit was so precious.

Today’s reflections were on the meaning of this day.  Biblically, I think that the meaning of the day was just to bring an exclamation point that on the Jewish biblical calendar, this month was of crucial importance.  The first month, Passover, and now the seventh month are most important times on the calendar.  In seventh month, we were to experience forgiveness on the Day of Atonement and all that is connected to it. (Lev. 16, 23)   The 15th to 23rd centered on the great harvest festival, Sukkot, and its concluding time of the 8th day sabbath celebration, Shemini Atzeret.  Rosh Hoshana, (not the biblical name) is the wake up call of preparation and accentuates the whole month. Maimonides noted this wake up call for sleepers, a key meaning of the sound of the Shofar.  The actual biblical name is the day of the blowing of the Shofar, Yom Teruah.

The Genesis account now has an agreement with scientists.  Orthodox Jewish scientists and conservative Christian scientists and other theists are happy about this agreement.  Atheist scientists, not so much.  I want to write about the Genesis 1:1.  The Universe had a beginning.  The famous astronomer, Frederick Hoyle, posited the steady-state theory of the universe.  It was the preferred view of atheists and agnostics.  The universe always just was, is and will be as it is now, everlasting cycles as in Hinduism.  Galaxies, stars and solar systems come into being and pass away in an everlasting process with no beginning or end.  Today, no one holds this view. The scientific evidence is so very strong against it.  The Universe had a beginning.  Some have called it the big bang theory since the universe constantly expands from a tiny point beginning smaller than the ballpoint on a pen.  From that concentration of matter, all has come.  There really was no bang, though the idea of an explosion fits the expansion.  It is rather a singularity event of beginning. It fits Genesis 1:1 perfectly.  This is so upsetting to some!  They even posit multiple universes and many such singular beginnings in some other unmeasured or undetectable dimension (It can never be discovered since it is beyond our universe to which we are limited.)  They will appeal to it for their defense of evolution.  It is special pleading with no evidence at all.

The argument for the existence of God from design is the second part of my article today.  Not only is there a beginning, but there is simply no way to account for the universe and life on planet earth including human life without positing an intelligent designer.  The idea of chance evolution is not new.  It was posited by the Greek philosopher Anaxagoras.  A chance evolution view was put forth as well by Epicurious, the Greek, and by Lucretius in Latin.   For the latter two, chance assembled all that exists by tiny particles colliding and joining.  Darwin sought to give chance more sophistication but it really was the same argument ultimately as these ancients.  He posited the idea of survival of the fittest once life came into being to explain the upward line of development ending in human intelligence.  Of course, this did not fit the fact that on a survival and adaptive basis simple celled animals have greater survival capability.  Today, Darwin’s simplistic view and all other iterations over the years have now been found to be bankrupt since the simplest cell is as organized as New York city.  That the organization of the cell is a most complex integrated reality that cannot evolve from simpler forms shows the impossibility of evolution. There is no simpler form that a cell can evolve from.

However, there has not been a catch up in the culture to what some know for sure, a paradigm shift.  You can read about the impossibility of naturalistic evolution and the irreducible complexity (Michael Behe’s term) or specified complexity (William Dempski’s term) that show it to be impossible.  It is summarized in Orthodox Jewish physicist Gerald Schroeder’s writings.  The evidence is so irrefutable that two of the most notable atheists have concluded that naturalistic evolution is impossible.  Antony Flew, the leading atheist philosopher in Britain, wrote a book asserting God Exists near the end of his life. This was a bombshell considering Flew’s history.  Then Thomas Nagel, whom some consider to be the greatest American philosopher, now emeritus, from New York University, historically an atheist, has argued that naturalistic evolution is impossible in his important book Mind and Cosmos.  Read a few of these sources and be amazed!

How can this be answered?  Again, only with special pleading speculation.  Maybe if our universe is one of an almost infinite number of universes that come into being and pass away, then what is impossible according to chance statistics becomes possible.  This does not work, not at all, since the issue is that in an evolutionary view, life had to arise spontaneously from inorganic life.  The first cell was so complex that it could not be done.  Therefore, the impossibilities of evolution from simpler to complex life based on the possibilities given this world’s beginnings according to the theory of evolution, is again impossible.

Finally, there is the issue of an anthropic universe.  Astrophysicists use this term to demonstrate that the whole universe seems specifically designed to support human life on earth.  The very forces of basic physics, strong and weak forces in atoms, gravity and the effect of galaxies on this earth, show an exact confluence of mathematical chance impossibilities that occur none the less.  Paul Davis, Michael Denton and Gerald Schroeder and many others argue this.  The answer of the atheists?  The same special pleading of multiple universes.  Yes, they will say, it is extraordinarily unlikely that such a universe that is so fine-tuned so as to support human life would exist.  However, if many universes exist and come into being and pass away, over infinite time, one would exist that is fine-tuned and really looks designed.  Of course, there is no evidence for this at all.  Again, on the idea of the complexity of the cell itself it is impossible within the universe that does exist.

So, from the big bang, or the singularity event of the beginning, to the complexity of the cell to the fine tuning of the whole universe, it is certain that the universe exists only by the will of an infinite intelligent designer.  Why is this now denied?  In the year 2021 the evidence is overwhelming.  Is it because these folks do not want to believe in God?