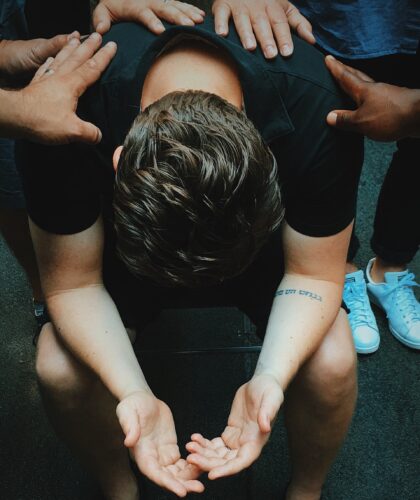 I have been connected to the ministry of prophecy for some 45 years, first in ministering to troubled people in Chicago when I would get a strong sense of how to proceed and sometimes had information that surprised the subject of the ministry.  However, I had not yet witnessed the type of prophetic ministry that astonishes.   In the years from 1984 until the present, I witnessed several meetings where prophetically gifted people could call people out of an audience by name and give them descriptions of what they were going through and confirm things for which they desired or needed confirmation.  The minister was not given the name of the person receiving the word.  I personally knew the people in charge, people with great integrity.  One was John Wimber.  Sometimes prophets would speak about world events or make predictions on coming events.  The track record on this was spotty. If there is an astonishing level of personal prophetic ministry, accuracy, we tend to credit other words that such prophets deliver.  I think that this crediting is questionable unless they have accuracy on such a level of prophecy. Some say that prophets leave the lane of their calling and authority and miss it on these other levels.   Early in the 1990s, I noticed that prophetically gifted people had much greater accuracy when they were submitted to apostolic and pastoral authority.

Personally, I have written that prophetic ministry has never failed me (in 45 years).  I don’t mean by this that I was not given wrong words.  That happened several times.  I knew they were wrong words.  However, I have received many words from those with strong giftings, astonishing words with amazing accuracy, and always fulfilled when I confirmed them strongly.  For example, when my son was dying with incurable myocarditis in 1987, the doctors told us to look for a burial plot.  Dr. Michael Brown prophesied that our son would be totally healed, normal, and it was not a matter of our faith but an absolute word, a decree.  Another anointed prophet saw the hands of God around his heart squeezing it back to normal size.  Eleven years later when this same son was on life support after a house fire, the people we knew with the greatest gifting could not get a word that our son would be raised up, but only that we were to pray for his being raised up.  When we were thinking about moving to Israel, we received three amazing words.  We were planning to move to the north of the country but given a word that we were to move to the Jerusalem area.  We were called out of an audience by a prophet who did not know that we were planning to move to Israel part time and did not know we planned to move to the north. This word was confirmed by two of our senior leaders, one a prophet in our midst, and we knew it was true.  The same prophet not remembering the earlier word, said at another meeting that we would first live in the north.  Indeed, our first four months were in the north when we attended language school at Haifa University.  Another prophet noted that in our process to get citizenship, we would find favor from a man in Tel Aviv.  We did not confirm or deny this word, but it did not seem to fit since we applied for citizenship in Haifa.  However, we had a Romanian document, and the Haifa clerk sent us to the Romanian desk of the Interior Department. There found favor from a man in Tel Aviv who was key to our receiving citizenship.  This has continued in our life to this day.

Yet in recent times, two matters have caused great doubt about the prophetic movement in the United States.  One was the prophecies on the Corona Virus.  Some said it would be over by last Passover.  Others that it would turn around and be over by Pentecost. But there were some, not much heard, who said it would be a devastating and a continuing plague that would last.  My own sense was to think it would be on the way out at Pentecost, but I did not claim I had a prophetic word and had no strong sense on this. I was trying to weigh what was being spoken.   Some of these same prophets predicted the Trump re-election.  Some of these prophets had amazing words about Trump’s first election, in some cases before it was even a thought that he would be nominated. One is not well known but had such a word. He lives in Australia.  Some of the words seemed astonishing and confirmed by the amazing fulfillments.  Now some of these same people are being discredited by critics.  As I write the election is being contested.  I never sensed that I was to publicly confirm or not confirm these predictions, though I did encourage others to weigh them and sense what they think about these word. While I write much on Biblical Law, social issues and policy, I do not think it would be good for our ministry to be making or endorsing big predictions, but rather to pray and fast for God’s righteousness and justice.  But what do we make of the prophets and the predictions now?  Not all were in agreement.

One friend said he was preparing some stones in case Trump’s appeals fail.  This is based on the idea that the standards of the Mosaic Covenant period are to be applied today.  It is also based on the idea that the prophets in the Hebrew Bible days were 100% clear and accurate.  One of my favorite theological thinkers is Biblical theologian Dr. Craig Keener of Asbury Seminary.  He is the President of the Evangelical Theological Society, the most prestigious body for evangelical theologians in America.  Craig wrote an excellent article in Christianity Today’s last edition on this.  As he survey’s the Hebrew Bible, he shows that the Biblical prophets were not always clearly presenting words that were black and white testable, to be fulfilled or they be stoned.  Keener gives examples of prophecies spoken after which there was change due to repentance such that what was spoken did not happen.  I think the stoning conclusion is a wrong interpretation.  Wrong words did not require stoning in my view, but stoning required also leading the children of Israel astray to idolatry. Israel was exhorted to not fear the prophets who were inaccurate.  The emphasis in the Hebrew prophets were not on prediction, but repentance and warnings on the judgment of God. However, there was much prediction.  There are several cases where the fulfillment seems unclear or pushed off for later ages. Some are so difficult in regard to identifying fulfillment that arguments take place to this day.  J. B. Payne argues that the devastation of Egypt by Babylon predicted by Isaiah happened in the 6th Century B. C. while Walter Kaiser sees it as yet future (now 2600 years after it was declared.)  For the people of that time, Isaiah could be seen as mistaken.  Did he need to be stoned?  Again, there is a conditionally in prophecy that often is not usually credited by today’s interpreters of the Mosaic Covenant period.  Here are some guidelines that help me.

However, this does not solve all the problems.  Sometimes even prophets with a credible record and fulfilling all three standards, miss it.  In the New Covenant, all have the Spirit in such measure that God does not want his people to be wrongly dependent.  We must hear and confirm the truth of the word and bear some of the responsibility.  In addition, God wants us to emphasize much more our obedience to the written word as our authority and not be living by the prophets’ gifting today.  Being carried away by seeking prophecy can be inordinate.  We have to also note that a prophetic word can be true when given, but things may change in ways that cause such words to not be fulfilled.  Though we do not like the easy way out excuse that this provides, it is true that some prophecies are not unconditional  When the prophet does not speak the conditionality it looks like he or she really missed it badly.  I wish the word always came with a clear statement of conditionality or that the word is a decree and unconditional, but it is not so.  It was not so in the Bible. When a prophet seems to miss it badly, it is crucial that he or she repent and be submitted to the leadership team to seek God on why.  A track record of missing it should lead to the conclusion of Deuteronomy, “You shall not fear him.”  At least this would apply to the levels of prophecy where the prophet is not accurate.  However, an accurate record type prophet should be given mercy and grace when they appear to miss it if they show a humble and repentant response and admit the error.  No, this is not the age to gather the stones. I much rather have 90% accuracy and the blessing of prophets then to stone them for the 10% inaccuracy.   I fear that if we are over critical, we will pull up the wheat with the tares and lose the blessing of the prophetic.  (This is an analogy from this text.)  When a prophet is doing personal ministry type prophecy, the subject person can confirm it or not, and it is not a major issue.  When the words are big ones on a national level or might be connected to reordering nations or movements, then we really do need very serious accountability.

We are seeing a challenge to the prophetic movement on the issues of independence, accountability, humility, and repentance.  Those who are critics also need a dose of humility. Let us seek the Lord together for cleansing and repentance.  In a document we helped create that now is on the web, Affirmations, and Confessions, we spoke to the issue of accountability repentance for wrong words.  My plea during this hour is that we would all approach these matters with humility.  I will continue to relate to fruitful accurate and godly prophets even if they sometimes miss it. I am responsible for what I confirm and hear.  Do see the Affirmations and Confession on Apostolic and Prophetic Ministry web site. www.ifli.co