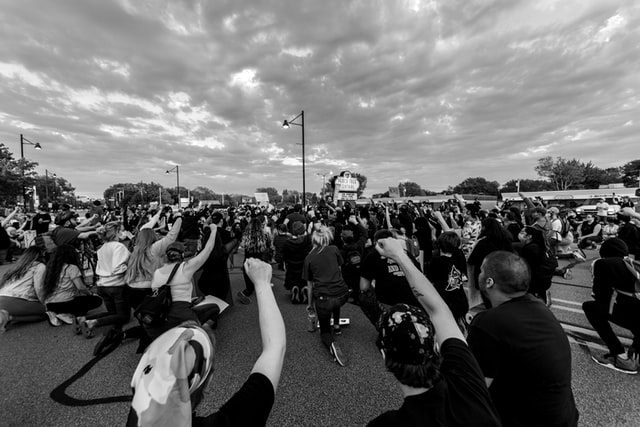 I have been greatly saddened to see the extent to which younger Christians and Messianic Jews are saluting revolutionary social movements that are opposed to the Biblical World View.  Perhaps they do not realize this incompatibility.

As I reflect on history, it seems that every social revolution that was not directly motivated by the biblical worldview or indirectly influenced by this world view, has led to destruction.  The Roman Catholic Catechism amazingly warns against utopian movements that are not based on biblical norms, and as you know I am not a Roman Catholic, but this statement is amazing.

“The Antichrist’s deception already begins to take shape in the world every time the claim is made to realize within history that messianic hope which can only be realized beyond history through the eschatological judgment.   The Church has rejected even modified forms of this falsification of the kingdom to come . . .”

Let’s just recount a few of these revolutions, biblical and anti-biblical.

The Biblical normed movements include the following:  the anti-slavery movement in England led by the famous Evangelical William Wilberforce who was friends with former slave trader John Newton who wrote the famous hymn Amazing Grace.  Then came the anti-slavery movement in the United States backed by Jonathan Blanchard, the founder of Wheaton College, the famous revivalist Charles Finney, and the  Stowe family, the most famous of which is Harriet Beecher Stowe.   Her father and brother were anti-slavery ministers.  Then in recent years the biblical-based civil rights movement under Rev.  Martin Luther King.   The biblical movements all hearken back to the idea of all humans having equal worth and created in the image of God. (U. S. Declaration of Independence).  In Acts 17:26 we read, “From one He made every nation of men to live on the face of the earth, having set appointed times and the boundaries of their territory.”

However, the anti-biblical movements led to death and destruction.  The French revolution and its guillotine, the Russian Marxist revolution, and other terrible Marxist examples: China, Cambodia, and today in Venezuela.   As Satan masquerades as an angel of light, we should note that the movements of our day may indeed come from an antichrist spirit.   The Devil, we read in John 10:10 comes only to steal, kill, and destroy.  Tens of millions have been slaughtered.  Marxist phrases like “To each according to his need and from each according to his ability,” sound so attractive but can be so deceptive as they call for a leveling equality tyranny.

Today, we find ourselves in a situation of tragedy in the loss of a black man by the name of George Floyd and the police abuse of other blacks. We also see the carnage of black on black crime, 7500 killed and we are not supposed to mention this.  Why?  Because the revolutionaries do not want us to see the whole picture but to focus on the anti-police anti-American ideas they put forth.  A biblical conscience should be deeply outraged by all this pain.  There should be movements of believers to clean up police and to lift the lives of our minority friends who are equally valued.

However, we now find the leaders of movements of deception were ready, poised to take advantage of the situation, spreading violence, utopian anarchist messages, Marxist ideology, and more.  When they occupy part of a city, they steal the property rights of the citizens. When they demonize police, they demonize many who give their lives to protect the people.  They violate Romans 13 that exhorts us to respect the civil authority and the power of the sword in authority.

The views and tactics of these radicals are anti-biblical.  They single out white people and include Jews in that category!  Yet in the Bible, we speak of many ethnic groups.  They are white, black, yellow, and every shade and style of bodily form.  All are created equal.  White-skinned people have many different backgrounds from many ethnicities, some nations with colonial history but some having no such history.  From the European nations have come the very ideas of civil rights and human rights that we seek to extend and advance (especially England).  The atheist historian Tom Holland in a recent book notes that all we value in rights, tolerance, and mercy come from the influence of the biblical world view.  Amazing!  However, when Martin Luther King spoke biblically, he rightly said that human beings should be judged by the content of their character not the color of their skin.  When whites are being made to repent for white privilege and especially white group guilt, this is the spirit of communist re-education camps not real biblical repentance for sin.   Of course whites in America today are by percentages more privileged.   But in the Bible, this would not be cause for repentance for a special original sin type guilt.  It would be a source of gratitude for all that has been received in God’s providence and then would require a responsibility to lift those who are not so privileged.  White guilt in America could have value as a concept if those who are privileged of all races do not seek to lift those who are less successful. But repenting for whiteness as inherently evil is anti-biblical.  I do think the American Church has reason for repentance in not focusing its primary efforts to the poor, for the Gospel is the greatest liberator.

In a biblical world view, we must not identify with movements that single out people of any color for special guilt or praise on account of skin color and ethnicity.  All ethnicities have good things to be praised and bad things from which to be redeemed.  We all are sinners.  As such we can look at the sad history of the world.  It is not merely Europeans that have oppressed people.  All of world history shows one ethnic group oppressing and subjecting other ethnic groups.   It is the nature of sin to favor those who are “like me” and to disfavor and distrust those who are not.  The Bible speaks to this in the numerous texts on how to treat the stranger, demanding that the Gospel first be given to the poor to lift them and finally in the parable of the Good Samaritan.  We ask the question, “Who is my neighbor?” and the parable answers the questions and extols the hated and marginalized Samaritan.  However, the Marxist influence in the Black Lives Matter movement, (and Black Lives Really do Matter), and the anarchist anti-police and anti-government thrust will lead to terrible destruction especially for the poor and marginalized.  Believers must not enable or support these aspects of what is going on.   When people are asked to repent for being white this is more a communist shaming and re-education tactic than the Biblical call repentance before a holy God who says all have sinned and come short of the glory of God.  All are called to deep repentance before him, to search our hearts for any prejudice and by the Spirit to root it out of our hearts.  We will never be perfect on the issue of preferring ourselves to others, but must always work against this selfish tendency.  However, Christians and Messianic Jews must not cow-tow to Marxist and anarchist phrases and demands.  We must call all to repentance.

In our universities, leftist ideologies have reigned.  We have for 60 years sowed to the wind in our universities and in the United States are now reaping the whirlwind.  The corruption of the movement for civil rights and lifting black communities is being corrupted with Marxist and anarchist ideas and will lead to more destruction.  The only hope I see is in the Gospel and a massive revival beyond anything we have ever seen. Such is the deep darkness right now, but my hope is that the Lord will rise upon us.  (Is. 60)