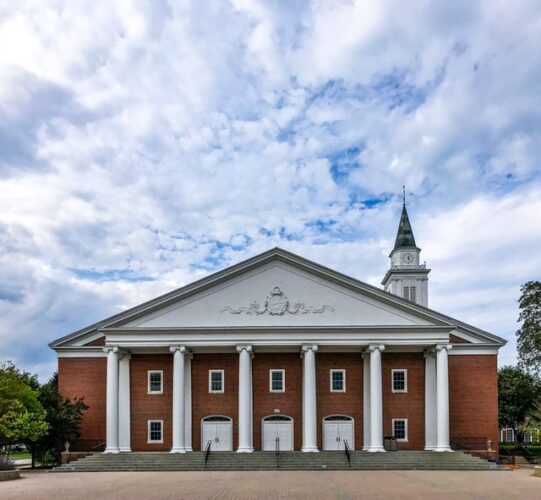 Recently I was prompted by the Holy Spirit to read a book by V. Raymond Edman, They Found the Secret. Why I never got to reading this book until now is a bit of a mystery to me.  I have always carried a special reverence for Dr. Edman.  Here is a little history.

In August 1967, I was a junior transfer student at Wheaton College, in Illinois.  I was in a time of great anxiety and agnosticism.  I hoped that the studies in philosophy, religion, psychology, and religion would provide someplace to stand.  In a time of great anxiety, a classmate suggested that I go visit Chaplain Evan Welsh, the pastor for the students.  I poured out my heart to him.  He became a spiritual father to me and the most important human male mentor in my life.  My father died before my 9th birthday.   Dr. Welsh spoke with a great and deep respect for “Prexy Edman.”   He was President from 1940-1965.  He is credited with leading the college to its academic ascendency in Evangelical higher education, Wheaton being called the Harvard of the Evangelical world.  I can testify that Wheaton was academically rigorous.  It was generally known that he prayed through the whole list of students every week.  Dr. Welsh also noted to me that Dr. Edman had some amazing experiences in the Spirit.  I thought he said there was an angelic visitation when he was sick as a missionary in Ecuador.  Dr. Edman retired from his role as President and now was Chancellor.  He had been seeking to overcome heart problems and was recovering from a heart attack.  We would see him walking in the main areas of the campus from time to time.

On Sept. 22nd he was the speaker in the chapel.  It was his first time to speak after recovering.  The beautiful chapel was named after him.  It was designed with acoustics and size so that the finest symphony orchestras could play at Wheaton and they did.  Dr. Edman got up to speak and exhorted the students to enter chapel with reverence, for we were coming into the presence of the great king.  He told of his friendship with Emperor Haile Selassie of Ethiopia and what it is like to enter the presence of the King, then exhorting us to see ourselves to be ready to enter into the presence of the King.  Then at that moment, he slumped and fell to the floor.  Wheaton’s President, Dr. Hudson Taylor Armerding (named after the famed missionary to China) came to the microphone and called out, “is there a doctor in the house?”  Then he dismissed the students to their classes as he went to his knees to attend Dr. Edman.  I then went to my next class, Sociology of Religion with Dr. Lamberta Voget.  Then we heard the bells of old main, Blanchard Hall, ring 67 times.  Dr. Edman was gone at 67 years old.  Dr. Edman died in Edman chapel and it was immediately re-named Edman Memorial Chapel. This greatly affected me.  I was a witness to this in my agnosticism.  Was God in this?  How?

Within a few days, a public memorial service was held.  Billy Graham preached the message and the Wheaton Choirs sang.  I think Dr. Billy Graham preached his greatest sermon, at least by my evaluation, that he ever gave.  Dr. Edman was his mentor from his days at Wheaton and then onward until Dr. Edman died.  Graham spoke on “A time for all things, to be born and a time to die.”  He not only gave a great message but told about the great life of Dr. Edman.  The favorite hymns Dr. Edman were sung, “Stayed Upon Jehovah,” and “It is Well with My Soul.”  Somehow these events left me with a lifetime sense of connection to this man.

During my two years at Wheaton, I heard some of Dr. Edman’s favorite aphorisms.  “Not somehow but triumphantly,” and “Don’t doubt in the dark what God has told you in the light.”  They stuck with me, especially the last one. But I did not read his books.  Now I read this one. It included his testimony.

Dr. Edman was connected to the Christian and Missionary Alliance denomination and made Wheaton Graduate school a place where CMA leaders could be trained.  Now I found that his roots were in that 19th to early 20-century movement that believed in a second work of grace, a work of being explicitly filled with the Spirit enabling both power for witnessing and for a victorious holy life.  This is according to the famous Keswick conferences first in England and then at Keswick, New Jersey.  Some called this second work of grace, the Baptism in the Spirit.  It was accepted by Charles Finney, D. L. Moody, his right arm and successor R. A. Torrey and many other famous people from many denominations, including the famous Bishop Hadley Moule in England.  Edman presents 20 mini-biographies, most of the figures who were well known in their day and others still well known in my early days of ministry.  All of them gave testimony of this definite second work of grace, a theology that was rooted in Methodism. They were amazingly effective or fruitful and lived joyful lives.  They professed a great level of victory over sin.  They also professed an ability to know the voice of God in his leading in their lives and to lead them into greater and more specifically applied truths in the Bible.  Edman professed the same thing. After reading this book, I became convinced again that we do not adequately disciple people to walk in the fullness of the Spirit.  This is the key to avoiding burn out, to fruitfulness, joy, and victory.

I recount one more little story. After my days at Wheaton, I spent another 9 months in agnosticism, but then came back to strong faith.  At Trinity Evangelical Divinity School, I had wonderful professors. I was, however, not in touch with the clear way God had been speaking in to me in those years and professed an Evangelical rationalism. This was in 1969-71.  Before I came back to a charismatic orientation, talking about the Spirit speaking to us was not credible to me.  Then one day one of my professors was talking about V. Raymond Edman during the days he was on the faculty at Wheaton and Edman was the President.  The faculty was given delegated authority by the board for some decisions.  They would sometimes get into debates and not be able to come to an agreement. On one of these occasions and probably others too, as described by the professor, Edman asked them to suspend the discussion so he could go and pray.  After prayer, he returned to the meeting and said, “God spoke to me and told me what we should do.”  My professor did not think this was a good way to lead.  I agreed back then, but now I agree with Edman.  He was a great and spiritual man and led Wheaton by seeking to know the voice of the Spirit for 25 years!   I only discovered Messianic Judaism after this time and became a leader in the movement.  But when I came back to the things of the Spirit, I found an orientation like V. Ramond Edman.  There is a commonality, a significant and legitimate overlap between the best of Evangelicalism and Messianic Judaism.  After reading Edman’s book, that common ground is most apparent.  We need the kind of spiritual orientation that was characteristic of this great and godly man.