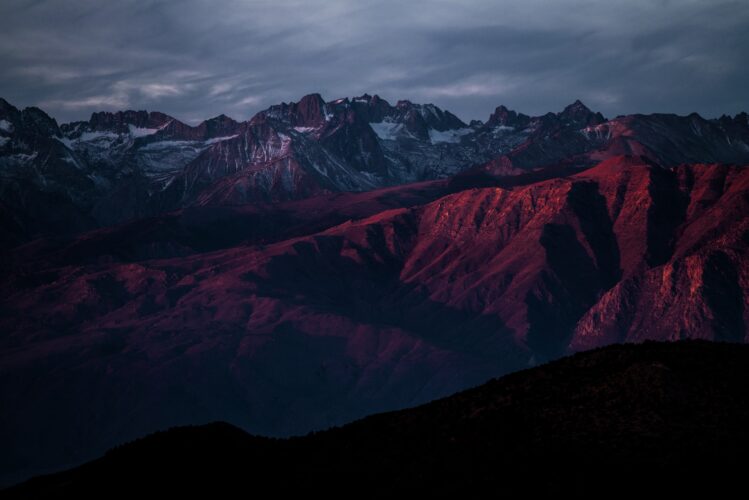 Some of my friends have argued that Trump lost the election because Evangelicals idolized Trump too much, and God was not pleased.  It is said that they were too much into politics and not enough emphasizing the Gospel and revival.  I really cannot judge this conclusion.  I know this was not true of most of my Facebook friends and others who supported Trump.  It may have been true of some, but no one has done an objective survey to prove this.  I have doubt that this is true.  I have seen some fall into this imbalance.

However, it prompts me to again write on the 7 Mountains, that Christians are responsible to influence our society through the seven mountains that are the most important spheres in the cultural formation of a people.  The originators of this view, Bill Bright, head of Campus Crusade for Christ, and Loren Cunningham, the leader of Youth with a Mission, were not radical dominionists who believed that Christians were going to take over the whole world and rule before the return of Yeshua.   When I first heard this teaching in the charismatic world, my response was, “Well what do you know, the charismatic church is discovering Reformed theology.”  Calvin, Wesley, and many others taught that we were to work to see society submit to the Law of God; also Finny the revivalist and the founder of Wheaton, Jonathan Blanchard.  This is what motivated the anti-slave movement, and they were very involved in political actions.  Here is my take on the issue.

Christians (and Messianic Jews) are responsible for engaging all the most important spheres of society (the seven mountains were called spheres by past thinkers).  However, the priorities have to be right.  One of the concerns I have had in the Seven Mountain teachers is that they present the issue as if all seven mountains are equal.  However, traditional sphere teaching from our forebears noted that the Church is the most important sphere, the largest mountain according to the teaching of Jesus in Matthew 16 on his establishing his Church where the gates of Hell would not prevail against it.   It is the Mount Everest of the mountains.  Unless the Church is revived, growing in evangelism and discipleship, and expanding its leadership, any hope for the other mountains or spheres to be conformed to the Law of God is not going to be successful.  Sometimes I think that the teaching on the seven mountains sees it as such a good thing that people go into the other mountains in vocations that we are not emphasizing raising sufficient numbers of leaders for the Church mountain.  The Church mountain disciples people for roles in all spheres. Then reformers taught that two other spheres are more central (two mountains are taller than all but the Church) than the others since everyone has to be involved in them. It is the family and civil government.  They did not single out education for they saw education as mostly in the family sphere and education as an extension of the Church and family.  One can see that these are the inescapable spheres.  They have a government which will affect our lives, and we have to be responsible for them.  So yes, it is true, before we look at education (the next most important) and media, arts, etc. we have to deal with the civil government.

The way to frame the issue is not to say that Christians have become too political.  Many who say this really do not believe in the great importance of our civic responsibility. In normal times this is less a priority but still important. Each person and leader has to ask if the prosperity and success of the Church is our primary concern among the mountains even if our vocations are in the other spheres.  Unless this is in the right order, we will fail on our Kingdom of God extension and in our influence in the other mountains.

In regard to the last election, then we some claim we were we too political.  I think that is a wrong way to ask it.  Rather it should be were believers giving too much emphasis to the importance of the direction of the civil sphere in their engaging this election.  It is difficult for me to generally agree with the critics on this, but I agree that this was true of some, but I don’t think most.  I think rather than the civic/political sphere can sometimes be life and death level issues for Christians/Messianic Jews.  If they see that the issues are at such a level, then to not fully engage in that season would be very irresponsible.  How can we judge being too engaged when we are talking about life and death.

Let’s take an example.  When Hitler came to power, most German Churches either supported him while others disagreed but decided to be silent and not be political.  However, a group of Church leaders signed the Barman Declaration since they saw Hitler as superseding the place of God and his word and violating the sovereignty of God in the conscience of the Church and its members.  These leaders were accused of being too political by some.  Then they were persecuted by Hitler.  This was early in Hitler’s rule before it was clear to many that he would slaughter the Jewish people and engage in a world war.  Were they too political?  Most today now extol those leaders since they saw ahead on the issues of God’s sovereignty over both the state on the Church and the life and death issues that would follow.

In the same way, we are dealing with the issues of the soft totalitarianism of the left that now have an influence in the Democratic party.  Some desire to limit religious freedom so that the baker and wedding planner are required to enable gay marriage.  Some have voiced the desire to remove the non-profit status of churches who do not approve of gay marriage.  There is clearly an attack on the sovereignty of God and the liberty of Christians.  Christian owned businesses are boycotted, denied concessions at airports, and more because the owner has Christian conviction.  Leaders are removed from their positions in companies because they have stood for Christian morality.  This is parallel to the issues of the Barman declaration.  They spoke out when they saw the state seeking to supersede the convictions of Christians based on the Scriptures and to assume a sovereignty only God could claim.  They became involved politically. Hence the Declaration of Independence notes that rights are God given, not granted by the State.  But the left does not believe this, and cancel culture seeks to destroy religious freedom rights by intimidation, firing and economic suppression.

However, there are also life and death issue.   We are told that we are to “rescue those being led away to death.”  The abortion plague is one such life and death issue.  How can we be too political when our motive is life and death?  Then in addition, we know that open borders and loose policies dealing with undocumented immigrants who commit a crime will lead to death. It has already led to heinous deaths.  I am not against very open immigration policies, but we must filter out the criminal elements.  Open border policies and sanctuary policies are policies of death.  So also defunding the police policies will lead to much more death in minority communities. Reform, and better training yes, but a smaller police presence where gangs are shooting minorities?  Again, this will lead to death.  Note also the policies on religious persecution in other lands.  Not seeking to sanction those who persecute Christians will lead to more deaths. What else in policy will lead to more deaths?  Transgenderism will lead to much more suicide.  Those who have done the surgery have a 41% greater rate of suicide.  See the video by Michel L. Brown, The Image of God.  Also not supporting the family will lead to children without two parents leading to more delinquency and more gangs and drug dealing and death.  So also, destroying options to get out of the failing schools and to have vouchers and charters will lead to fewer escaping the treadmill of poverty. This also has an effect on crime and death.

Never in my lifetime have I see the issues so much as life and death issues.  I think deep and concerned engagement is justified.  It is not being too political.  Having said that, I still think that the health of the Church, revival, evangelism, and discipleship should always be first in our hearts.  But how healthy is a church that does not engage then the issues are life and death issues?

In the old days, the difference between the Democrats and Republicans was on the size of government programs, welfare programs, support for unions, etc.  The issues were not life and death. The Vietnam war was said to be Johnson’s war, a Democrat.  Civil rights were resisted by Southern Democrats and supported by the Republicans under Republican Everett Dirksen of Illinois.  It was in divide within the parties not between them.  Civil rights was a life and death issue, and it was right for the Church to fully engage.  Today we are dealing with historic life and death issues.  We may lose but we have to take a stand.  I don’t believe the Church was too politicized.  That young adults are said to have left the church over this is proof of the weakness of their relationships with Yeshua and their lack of discipleship in a biblical world view.