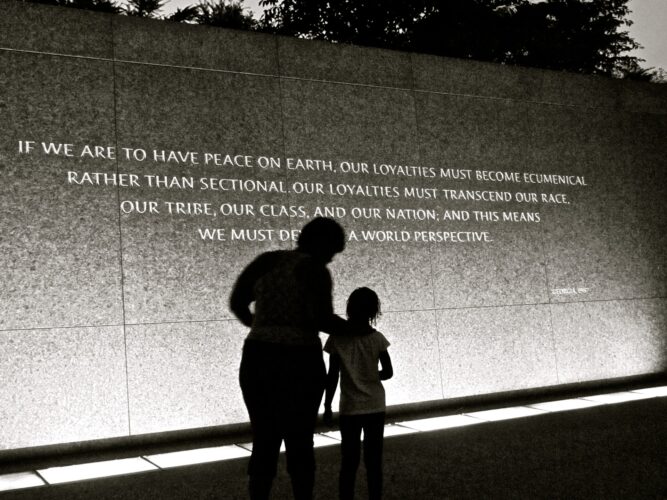 The fountainhead, the roots of all human rights progress in the West can be traced to biblical influence.  Only nations that have these biblical roots have embraced the quest for human rights and outside of this influence, it is unknown.  So, historian Tom Holland, an atheist, in England argues. The magnificent writings of the great scholar Rodney Stark shows this in several books.   See his, For the Glory of God, How Monotheism led to Reformation, Science, Witch Hunts, and the End of Slavery.  Fighters for human rights on a biblical basis have been the key to real progress. Of course, not all professors of faith had any real commitment to human rights, but those who were motivated by God and biblical teaching to fight for progress were greatly influential.  Here are two examples of the kind of biblical teaching that got seeded into the world through the spread of Christianity,

“From one he made every nation of men to live on the face of the earth, having set appointed times and the boundaries of their territory.  They were to search for Him, and perhaps grope around for Him and find Him.  Yet He is not far from each of us.” Acts 17:26,27 TLV

Search as you will the ancient traditions and literature of the world and you will not find the idea that every individual is of special importance as crated in the image of God.  We can not make progress by persecuting and mistreating others!

Christian rooted cultures (those who were historically Christian influenced) produced two kinds of movements for human rights.  First are the movements whose vision and values are in accord with Scripture.  They are best led by committed Christians like Martin Luther King.  Sometimes people in these movements are not Christians but so influenced by the Bible that their movement has a biblical character.  (Gandhi).  Others have a vision for a society and how they want the world to be.  However, there are often strong departures from biblical norms and values.  These movements become very destructive.  They are like cults from Christianity.

The greatest example of the destructive cult movement for equality, Marxism, has done untold damage.  Whenever a society goes Marxist it must enforce its authoritarian order by oppression and violence.  The great adversarial relationship with China is due to its Marxist leaders from the early days of the Communist state, though China today is hardly true to Marxism though it is brutally authoritarian and oppressive.  Tens of millions have been slaughtered in the quest for equality in human rights.  The idea of equality in regard to equal outcomes in income, wealth accumulation, and more as a state policy leads to terrible destruction, though of course as Messiah’s followers may voluntarily give up wealth for higher callings.  We think of the revolutions. Whether or not we think the United States revolution was justified, Christian or Judeo Christian values dominated the leaders.  In the French Revolution, a wholesale rebellion against God and biblical values were ensconced.   The slaughter for equality is terrible. Sometimes you can tell the difference easily.  More biblically rooted movements value human life and eschew violence and oppression as a way to a more just society.  However, for Marxist and other evil supposed equality movements, violence and death for those in the way is accepted.  For Marxist equality, millions can be slaughtered. Marxism always leads to great oppression and more poverty in Cuba, Venezuela, N. Korea, China, and Russia.  China now moves away from Communist equality toward enterprise and wealth disparities but they maintain the authoritarianism. (See my book Social Justice.  Justice is not equality generally but only in biblically defined contexts)

One other key to biblical human rights is that they are based on biblical norms of morality.  Fostering destructive patterns of life cannot be fostered as human rights.  Today so-called human rights are toward destructive behaviors being celebrated and an enforced affirmation of these behaviors.  These behaviors will lead to family destruction and greater poverty.   Yet, we are to treat people who hold to such wrong ideas and foster such destructive movements with love and dignity since they are created in God’s image. The battle is fought on the basis of ideas and not on the basis of their oppression and persecution.