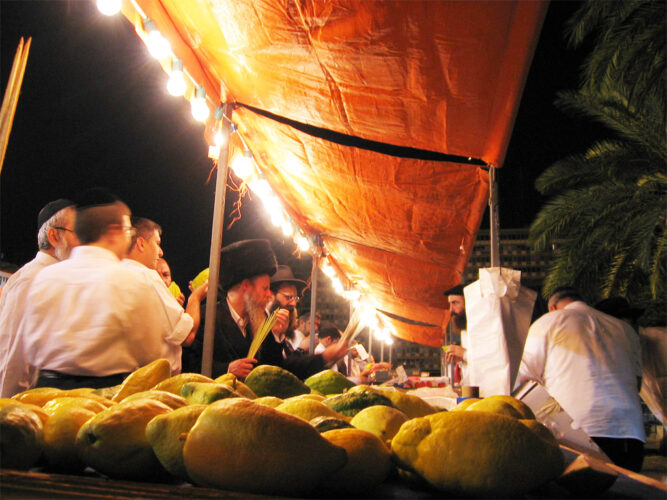 The sabbath rest of the first day of Sukkot/Tabernacles is now coming to an end.  We now celebrate the next six days as well but not as sabbath day rest days until the 8th day of rest, Shmini Atzeret.

Messianic Jews and Christians who are zealous for a Jewish rooted (original context) understanding of their faith are familiar with the major Feasts and Holy Days.  Most know their historical meaning to ancient Israel, fulfillment in Yeshua, and last days and Age to Come symbolism.  I will not belabor this, but no doubt many of you see site after site and blog after blog teaching on this.  Here is a very brief review and then some new comments on what is not usually taught.

The Fall Feasts come on the seventh month of the biblical calendar.  It is the month of making perfect (as symbolized in the number 7).  The month begins with the sound of the Shofar.  It is called Rosh Hoshana due to the Rabbinic teaching that the universe began on this day. It is taught in Judaism, and I think it is likely, that the blowing of the Shofar is a clarion call to get ready and fully engage and prepare for the whole month.  We do see a foreshadowing of the trumpets of the judgments in the book of Revelation.  On the 10th day Yom Kippur is observed.  Confession of sin takes place, sin is forgiven and covered (kippur).  Of course Yeshua, our High Priest, fulfilled the meanings and brought His own blood into the most Holy Place.  The day looks forward to the general repentance of Israel and the nations where repentance will take place and His Yom Kippur/Passover atonement will be applied more fully to the whole world.

Sukkot is a festival of the final harvest of the year.   It is also the largest harvest.  We are to dwell in makeshift dwellings and remember our time in the desert before entering the promised Land.  This is to remind us that God provided in the desert and that our provision comes from Him.   However, it also looks forward to the Kingdom of God being in full manifestation on Earth.  After the last wars, the nations will enter the Kingdom of God and send representatives to the Feast, including all who battled against Israel and survived.  We are therefore commanded to rejoice during the week of the Feast.  This was the Feast in which Yeshua proclaimed himself the Light of the World.   The context may have been the candle lighting ceremonies in the Temple.  Also, he proclaimed himself the Water of Life.  “If any man thirst let him come to me and drink.”

The rejoicing on Sukkot would have especially been an enhanced rejoicing every seventh year, the Sabbatical Year, and the 50th year, the Jubilee Year.  First on the Sabbatical year, all debts were canceled.  All who were indebted were given a new start. This is an amazing law.  It influenced American law so that one can declare bankruptcy and be released from debt every seventh year.  All who fell into need and debt would have a new start, a clean slate.  Also, the land was to lie fallow and be renewed.  God promised that if Israel acted in faith, the sixth year harvest and what grew naturally would be so abundant, there would be no lack.  Such a law could only be possible by supernatural provision by faith obedience.  As a principle of agriculture, we know that land renewal is so important and fields must have fallow years.  The Feast of Sukkot therefore would produce much greater rejoicing in the sabbatical year.

The Jubilee Year was much greater than the Sabbatical Year.  Not only was debt canceled.  That happened in 7th Sabbatical year in the cycle, the 49th year, but the 49th year led to the 50th where land was redistributed.  All who had to sell their land now received it back.  The land returns to the family owners, even if the leader of the family who lost it had died. Since in an agricultural society great wealth is in the Land, the restoration of the Land in this way precluded an ensconced class of the very rich and those who would live on the land as serfs.

Yeshua proclaimed his ministry as a time of Jubilee and his announcement in Luke 4, that his ministry would reverse circumstances for the poor, the sick, the demonized, the grieving, the imprisoned and the abused, was an amazing announcement. It proclaimed liberty as the announcement on Yom Kippur on the Jubilee year.  “Proclaim Liberty throughout the Land” became the cry of the patriots in the American Revolutionary War and is inscribed on the Liberty Bell.  The goal of the Torah is amazing,  to see that all had provision and a store of wealth.

Alas, we are told in Jeremiah that Israel did not have faith to keep the Jubilee year. This raises other questions about economics.  The Bible allows for rich and poor in society, and gaining wealth in trade, production and more. It is not re-distributed.  But a part of the wealth is, that is the land. In the great debate between the most libertarian, the progressive Democrat and the Socialists is a great debate with a huge gap of the divide. For Libertarians, income taxes are a type of stealing.  The Democrats say that the rich need to pay their fair share (which percent is never defined and then the higher taxes end up being charged to the consumer in higher prices).  The socialists want to level wealth and income.  What a great gulf!  There is a middle ground, that the wealthy would pay for lifting the poor by providing job training, real education, and police protection so that the young would not turn to criminals for their advance.  Rather than the government doing so, I would like to see the incentives for taxes such that the rich have to give a percent that they choose to private programs that they believe are doing the best job with real results. Corporations can do job training and then hire.  This is more productive than paying for often worthless college experiences.

At any rate, let us rejoice this Sukkot.