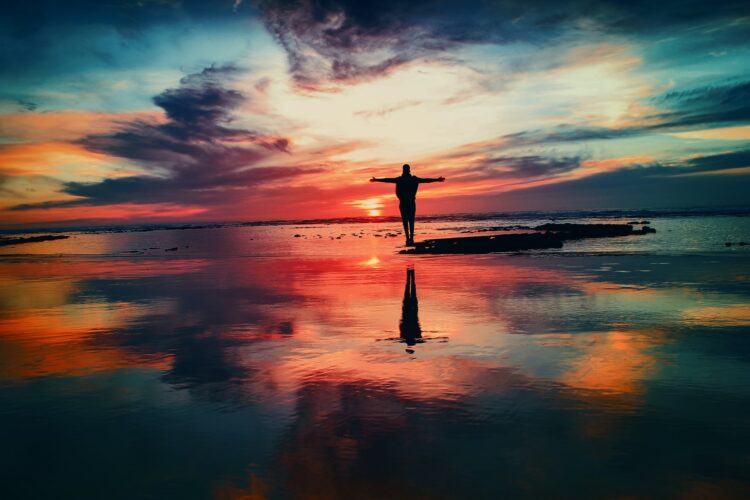 As a Wheaton Philosophy major and then an Assistant to the Professor of Philosophy of Religion, I wrestled with what was called the mind-body problem.  The atheists in philosophy and brain science were more and more saying that the mind and brain were the same thing.  The mind was simply a matter of brain states.  The mind or soul did not transcend the brain.  When the brain is dead, the person ceases to be.  The well-known atheist analytic philosopher J. C. Ryle argued against the idea of the transcendent mind as the “ghost in the machine.”  They were less clear on just what the mind was since mind language, mental pictures, ideas and so much more can not be described in terms of brain states.  As the famous German philosopher, Martin Heidegger argued, one cannot reduce the “lived experience” and the terms in which we describe it to the terms of physics and chemistry.  Yet the problem remains.  What happens to the person, the mind, consciousness, or soul when a person dies or when an old person becomes senile.

I dealt with this on a personal level when my dear grandmother began to lose some of her mental capacities.  Soon after my mother visited, on the same day, my mother would talk to her by phone, and then she would ask why my mother had not visited in such a long time!   After her fall, a broken hip and hospitalization took a toll and greater senility resulted.  From 1971-1972, near Wheaton, I worked as a cook in a nursing home and saw senility up close.  A dear Baptist woman, Anna Giesfield, used to come into the kitchen in her wheelchair and offer to help me.  She said lots of guests at the resort were coming for dinner, and we needed to get ready for dinner.  I assured her that we had it all under control and she was there to enjoy and relax.  This was sweet senility.  However, others just moaned and seemed lost, not knowing where they were or what to do.  Was their brain deterioration proof that the mind/soul or whatever was so dependent and part of the brain that both were dying together, gradually ceasing to be?   As a follower of Yeshua and a believer in his resurrection, I knew that somehow the person transcended physical death and awaited the resurrection, but I did not have good enough answers.

About two decades ago, a brain physiologist, Mario Beauregard, wrote a book called the spiritual brain which proved that operations of the mind and soul transcended the brain.  The reality of quantum physics also pointed to events that had no brute physical causation explanation where events at one place miles away from another place had a parallel effect there with no seeming physical connection.

However, in recent years, I believe I have more clarity.  Two things have added to this clarity.  First is the extensive literature on what is called Near Death Experiences, (NDEs).  I call the most amazing of them death and resurrection experiences.  The best book I know on this is by John Burke, Imagine Heaven.   The second is the literature of a new movement inspired by Jim Wilder, who calls himself a neuro-theologian.  Two books present his views well, The Other Half of Church by Michael Hendricks and Jim Wilder, and Rare Leadership by Wilder and Marcus.

The central thesis of Wilder is that we must get a hold of new research into the distinctions of the left and right brain.   The left brain is the logic information processing part of the brain, and the right brain is the intuitive, fast track, immediate processing and response part of the brain.  Much of our immediate behavior processes through the right brain and decides before the left brain gets started.  If we are to disciple character, then we must disciple the right brain.  Wilder presents an amazing outline of brain responses and the different parts of the brain that do different things in that amazing fast-speed response.  However, though Wilder says that spirit transcends the brain, and he and the Life Model Works movement which he inspired is very strong on hearing the voice of the Spirit and gasping God speaking to us, Spirit to spirit, one could wrongly conclude that the books are teaching that we are our brains.

Here is where the NDE literature and John Burke come in.  This literature proves to an open-minded person that the soul transcends the brain and that God can separate the soul and the brain.  In an NDE persons experience themselves leaving the body and having total and heightened awareness.  They describe the scene where their dead body lies.  They accurately describe the room, what the doctors were doing, nearby rooms, if drowning, those around the pool, or in a car accident in the same detailed types of description.  They sometimes accurately see events happening in the areas nearby.  There is no naturalistic explanation for this.  They often then go through a tunnel and if they are followers of Yeshua,  end up in Heaven.  They see Jesus and loved ones and have conversations, sometimes with amazing and accurate information.  Sometimes those who are not followers of Jesus go to heaven, but others go to Hell.  They are given an opportunity and a choice to go back.   They travel back, enter into their body as they come to.  The pain resumes whereas out of the body they were gloriously pain-free.  They remember their experience and return to recover with new faith and to live with a new faith-confidence.  There are a plethora of such documented experiences.

So how do we put Burke and Wilder together?  There is a way.   Both are so important.  We learn that to interact and have authority and affect things in this physical realm, we must have a physical body.  This does seem to be biblical.  When we leave the body our time of major influence in this world is over though there is something to the fact that we are in communion with those who died and there are experiences with those who have died from time to time (J. B. Phillips, the translator, with C. S. Lewis).  Our direct experiences with God and of revelation do transcend the physical brain.  It is my view that we should see the brain as the manifestation in this world of the soul.  The brain is the most central and important manifestation of the soul in this world.  We must have an earth body not just the part of the person who does appear in heaven as if physical but without an earth body. I prefer to use the word soul over the spirit to differentiate the spirit as the deepest part of us where we have intuitive and direct communion with God.  In the Bible, the two terms are not clearly distinguished, but I believe there is a tendency in this direction.  Plus, the soul is not only manifest in the brain, but though that is primary, but in the larger body (See, Babette Rothchild, The Body Remembers).

The soul/spirit together is the transcendent center of our human existence.  As such it is no ghost in the machine but is a differentiated complex reality.  The brain has 171 billion cells.  Why should we think that the soul is any less complex? This is a thought experiment, not a scientific assertion, but why should we not think that the soul would have 171 billion soul cells parallel to the brain cells plus connection to body cells beyond the brain.   Therefore, what happens when a person dies, or becomes senile, or has a death and resurrection experience?  I believe that in the death and resurrection experience or when a person dies God separates the brain and body from the soul totally.  However, in senility or brain images, nothing of the soul ceases to be, however, that aspect of the soul that gets through on the physical plane of life in this world no longer has access. The soul is fully there but part of it cannot get through.  Sometimes some relief for the injured takes place by other parts of the brain developing the functions.  When the brain deteriorates the soul just cannot get through.  However, until then soul and the physical are so totally integrated that we cannot distinguish them.  We are fully psycho-physical beings.  We must think in terms of other dimensions, multi-dimensional thinking.  The soul is integrated into the brain but is also other dimensional.  We also access the soul through the brain. When we train the brain we train the soul.

Then, in addition, in this world the brain and soul are so closely, almost totally joined and integrated, you reach the soul through the brain.  If you train the brain (Wilder’s term) you are training the soul.  In this space-time physical world, we cannot distinguish them except in the supernatural realm of the Spirit and revelation or illumination.

However, let us not think of the brain as the sum of the human personality.  Let us rather think of the soul as really there, as differentiated in functions as the brain, and as transcending the brain.  The brain and soul learn as one.  The brain responses are also soul responses.  Therefore, we speak of left-brain/soul and right brain/soul.

I don’t know what my readers will think of this essay, but I can rest on this way of seeing things. It is the conclusion of many years of reflection.