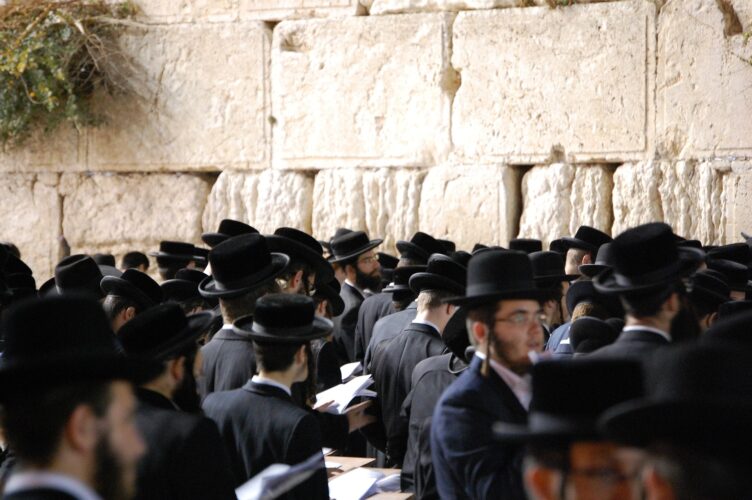 Some of my Facebook followers have been informed about the Ultra-Orthodox Jews in Israel from this page and perhaps from their own reading.  The election coming up again brings the issue of the conflict of the Ultra-Orthodox Jews with the rest of Israel society to the fore.  Ultra-Orthodoxy is not monolithic though it appears to be to outsiders.  The antipathy from the rest of the society is due to the fact that the Ultra-Orthodox do not as a rule serve in the army or do national service.  Secondly, generally, the men do not enter the workforce and support their families. The women work as they can.  The men study Talmud (they call it Torah study, but we should understand they mean Talmud study including subsequent centuries of traditional Jewish texts.)  They argue that this is so important that though it leads to semi-poverty and welfare dependence, they have a right to do so and that such endeavors are the key to the safety of the Jewish people in the Land. Some of the Ultra-Orthodox are positive to the State of Israel and some are against the existence of the State as a pre-mature endeavor.  The Sephardic Ultra-Orthodox represented by the political party Shas is a bit more flexible on these matters, but they support the Ultra-Orthodox consensus on these issues.  This includes a state-supported educational system for Torah study that does not include subjects that can prepare the men for work.

An accommodation with David Ben Gurion in the early days of the State for a small number at that time has mushroomed into 12% of the population being in this orientation and costing great amounts to the whole society.  Hence the bitterness.  However, when it comes to the vote, other things generally supersede this with enough of the people that they vote for parties, especially Benjamin Netanyahu’s Likud, that will include Shas and United Torah Judaism in the coalition.  Without them, he does not have enough mandates in the Knesset to be the Prime Minister.  He, therefore, submits to their demands.  You recognize the Ultra-Orthodox by their varieties of old-style dress, back coats, and hats.  Different sects have different styles.  They are to be distinguished from the Nationalist/Modern Orthodox who serve zealously in the Army and excel in many professions.  There is one thing to bear in mind.  The power of the Orthodox, both Modern/Nationalist and Ultra, are a firewall against the radical LGBTQ agenda in Israel, though it is still at a problem level.  The Messianic Jewish Moshav Yad Ha Shmoneh was taken to court for not renting for a gay wedding.  This is selective and unfair since no Orthodox hall would be so sued.  There is still no gay marriage done in Israel.  That is due to the Orthodox.  Their role in the next government is a crucial issue.  As of now all of the Ultra-Orthodox are predicted to have about 15 mandates.

So how did this ever happen?  In Eastern Europe and Russia, the origin of the Ultra-Orthodox, the men had to work.  Only a few could be full-time rabbis and students for a lifetime.  The Eastern European states would not give welfare to enable them all to bow out of work.  Many do not realize that what exists is unique to Israel, though it has now spread to some communities in the New York City region where they game the welfare system.   It goes back to a particular famous Rabbi, though not an ordained one.  His name was Avraham Yeshayahu Karlitz, known as the Chazon Ish (Vision of a Man) after one of his books.  Karlitz moved to Israel in the 1930s.  After World War Two, the Ultra-Orthodox community was devastated.  The majority of their people were killed.  The extended family structure, which was a key part of tradition transmission, was destroyed.  How could Ultra-Orthodoxy survive?  Ben Gurion was sympathetic to their plight and wanted them to survive, but not to become as they became, a state within the state.  Karlitz envisioned a new thrust to save the Ultra-Orthodox, the Yeshiva as an almost monastic community where men would study day and night.  The Yeshiva in a way replaced the extended families which no longer existed.  It was a total living together focus.  Homelife was secondary and work in the society largely eliminated for most of the men.  When it was a few it was doable.  But with large families, the Ultra-Orthodox have greatly increased their numbers.  This whole situation is a historic anomaly and unlike the traditional Judaism of centuries. It should be known as well that in the government Shas controls immigration and resists all believers in Yeshua.

Here is a question.  Can this situation be changed such that the Orthodox have to go to work and do national service and thereby escape poverty while yet providing the firewall against radical social agendas from the secularists?  This firewall is a key to averting God’s judgment. That is my desire.  The election at the end of this month is crucial.  The reader should note my other post on the parties and the upcoming election.  These are crucial matters for all that pray for Israel.  The research of Vivian Bercovici in the Jerusalem Post for Feb. 27th was very helpful to the second part of this article.