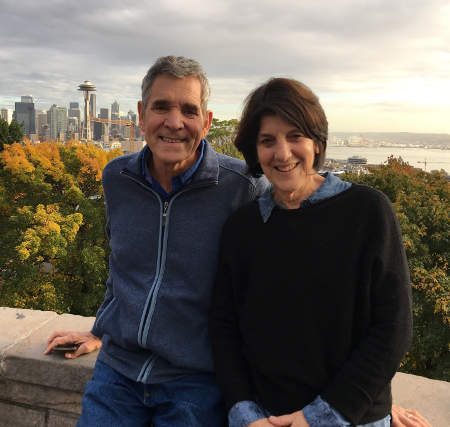 I have known three men who are with the Lord who were so filled with God that they seemed not of this world. The first was an elder of the congregation where I was saved, Larry Carroll. He was a spiritual father to me. In December 1964, he and the youth director of The Reformed Church of Westwood, came to our home when it was almost midnight to pray for me to receive the immersion in the Holy Spirit. That was a wonderful experience. Larry walked in a level of faith and love that I had never seen before. He owned a decoration and upholstery business in Westwood, New Jersey. Larry later lost 12 year old son in a terrible accident where five of the church young people on a youth group outing were killed. Now as a married adult, Larry simply said that his son had the privilege of being in heaven before him. He continued walking in love and faith. He won many to the Lord. Then he survived a brain tumor that left him a bit bent over, but continued for many years showing amazing joy and love. It was as if he had one foot
in heaven and one on earth.

The second was another spiritual father, Chaplain Evan Welsh of Wheaton College. During the darkest days of my life, he invited me to his home and opened his heart with an unusual love. Chaplain Welsh also a man who knew tragedy, and yet poured out his life in love for people. His comfort, his constant availability to me, tears of empathy, and hospitality were amazing.  This was the experience of many others. For me, in those dark years, he was proof of the existence of God and the truth of the Gospel.

The third, we have just lost, a messenger of the love of God, Eddie Santoro, the first senior pastor of our congregation in Jerusalem, Ahavat Yeshua. I first met Eddie in Kingston, New York when Dr. Michael Brown was a keynote speaker at a conference at a church where Eddie was an elder. Mike had a strong sense that Eddie was to start a Messianic Jewish Congregation. I encouraged him to do this as well. Eddie was a businessman; his company built houses. Now he would be a Messianic Jewish congregation leader. His new congregation soon flourished. His love and enthusiasm just drew people. Then Eddie and Jackie, his amazing and dedicated wife, sensed they were called to make aliya to Israel. Eddie eventually became an elder of Tiferet Yeshua in Israel which was led by Ari and Shira Sorkoram. Soon young adults gathered in large numbers to experience the presence of the Spirit and to be enjoined to walk in love as Yeshua.

When he was called to plant the new congregation in Jerusalem with Asher Intrater, he was appointed the first pastor and held this role for ten years. He and his wife Jackie offered hospitality, mentoring, counseling and prayers which again drew people. They knew they were loved and valued. This enabled them to believe in God’s love for them. This love did not mean that Eddie was indulgent with regard to sin. Eddie’s love was biblical love, not humanistic indulgence. He called for those he loved to receive the power of God to overcome sin and exhorted all to high biblical moral standards. Eddie was a wonderful cook and invited those he shepherded to enjoy his culinary creations. Eddie’s preaching usually turned to the love of God and our call to love one another. When Eddie was diagnosed with brain cancer, he decided to fight the cancer with prayer, medicine and the word of God and to love all the more. He came through the first surgery and went through a period where no cancer was found. He increased his evangelistic witness everywhere he went. The hospital waiting room was his opportunity to reveal the truth of the good news. He continued to lead the monthly gathering of the over 55 fellowship (third seasoners) sponsored by our congregation but including an inter-congregational contingent. Then came the return of cancer and another surgery and recovery. For a season there was a good result. Eddie’s life was extended three years beyond the doctor’s predictions. The love continued to flow through Eddie and Jackie. This continued in the final weeks before Eddie was no longer able to communicate well. Eddie now is in glory. He is one of those three most god like and loving in my experience. Yes, it is sad and hard for us to be separated from him, but we are with him spiritually at the throne (Eph. 2:6). We will be
rejoined either in our deaths or at His return.