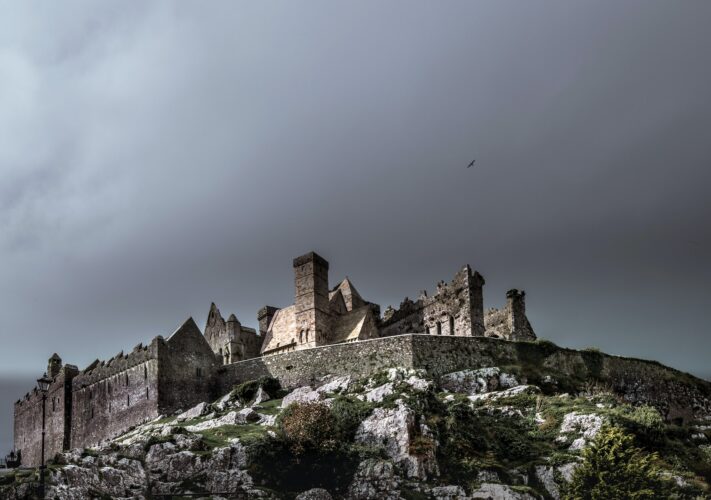 Ancient cities built amazing walls, fortifications that turned their cities into fortresses.  One morning a few days ago I woke up at the end of a dream.  I saw a huge castle-like fortress that represented the power or strength of the atheist-secular culture that now dominates the Western World.  It was built of huge stones and looked impregnable.   Then I saw that explosives placed in strategic places could bring the whole thing crashing down.

After this, while still woozy and waking, I thought of the huge statue image in Daniel 2 representing the four major empires of the ancient world and some say in the feet the revised empire of the last days.  A stone cut out crushed the feet of the statue and it crumbled and became as nothing whereas the stone became a great mountain that filled the earth.  The stone is the Kingdom of God.  Some say that stone is the Messiah King.  However, it will fill the whole earth.

We live in a world where government and big tech media control speech and information at levels that were unimaginable a few years ago.  Even in scientific and medical matters, once a mainstream view has been declared, other views are canceled, even if held by top scientists.  Of course, this is really anti-science since science progresses through argument and dissent.  Oftentimes, the dissenters in the history of science were found to be correct.  Today we see this in COVID science, climate science, gender issues and so much more.  However, the greatest shutdown is on worldview matters.

Regarding a biblical worldview, today we have amazing apologists for biblical faith.  I can name many.  I am an apologist and wrote a textbook on apologetics.  The power of their augments reaches few who are within the atheist secular fortress and subject to the strongholds of the mind of the prevailing media culture.  Yet, the quality of the evidence today is the best we have ever had.

I herein note two examples.  First is the new and powerful evidence for the intelligent design of the universe.  How many in the secular atheist world know that the consensus of the top scientists (especially astrophysics) is now that given the complexity of life and the amazing arrangement of the forces of the universe, that there is almost zero chance that life could have arisen spontaneously by chance.  Scientists have written papers on “the anthropic universe” meaning that the universe as a whole seems to be perfectly arranged and fine-tuned to support human life.  The end of the steady state theory of the universe and the consensus on the “big bang” theory (the singular event) brings years of atheist reasoning to an unwanted conclusion.  What to do?  Atheism has to be maintained so some like Steven Hawking posit the multiverse theory, that our universe is one many. What is impossible in probability with our universe can be made probable, it is thought if we posit enough chance-based universes.  This is whistling in the dark!  There is no possible evidence for it!  We are locked into our universe. Plus, when we begin with the universe before life, there is still no probability to produce the design quality of single-cell within this universe. It could never happen.  How many know that this convinced the leading atheist philosopher in the English-speaking world, a top philosopher of science, Dr. Antony Flew, to declare there this a God.  How many know about Dr. Thomas Nagel, maybe America’s leading philosopher at NYU to declare that the Darwinian chance theory of evolution is impossible and incoherent?  Though still wanting to be an atheist, he has to posit something of mind inherent in the universe (Mind and Cosmos). We can add many more examples, but one is amazing, the former atheist physicist of MIT, Dr. Gerald Schroeder.  He became convinced of the existence of God and his design in the universe.  He became an Orthodox Jew and has written many books related to his discoveries.

The second point is about miracles. From the vastness of the universe to the personal level, we speak about contemporary miracles.  There is a stunning plethora of supernatural miracles being done in the name of Yeshua, Jesus, today that are not capable of being explained by natural law. No stretch of the imagination can explain them.  These are instant healings, including resurrections from the dead.  These are well documented.  Dr. Craig Keener’s monumental two-volume set, Miracles, or The Credibility of New Testament Miracles, speaking of New Testament like miracles today, is so well documented that many mainstream Evangelicals have endorsed it.  We know people who have received such miracles.  Keener is so well regarded that he is today the President of the Evangelical Theological Society.  About 120 years ago, the famous healing evangelist John Lake did many miracles.  His miracle stories were reported regularly in the Portland press.  This does not happen today.

The control of the cultural elite in the West has built a fortress of media that prevents the information from being conveyed.  The whole fortress has to fall. I believe that the only answer is a mighty revival that is so grand that the secular atheist fortress cannot resist it.  It is time that we all join in every city and town to pray for it, in regular gatherings, in 24/7 prayer sets, and more crying out to God to send a mighty revival on his people. Pray also that the fortress is destroyed. Only when his people are generally empowered can we break through.